The Constitutional Argument for Abortion Rights

The Constitutional Argument for Abortion Rights 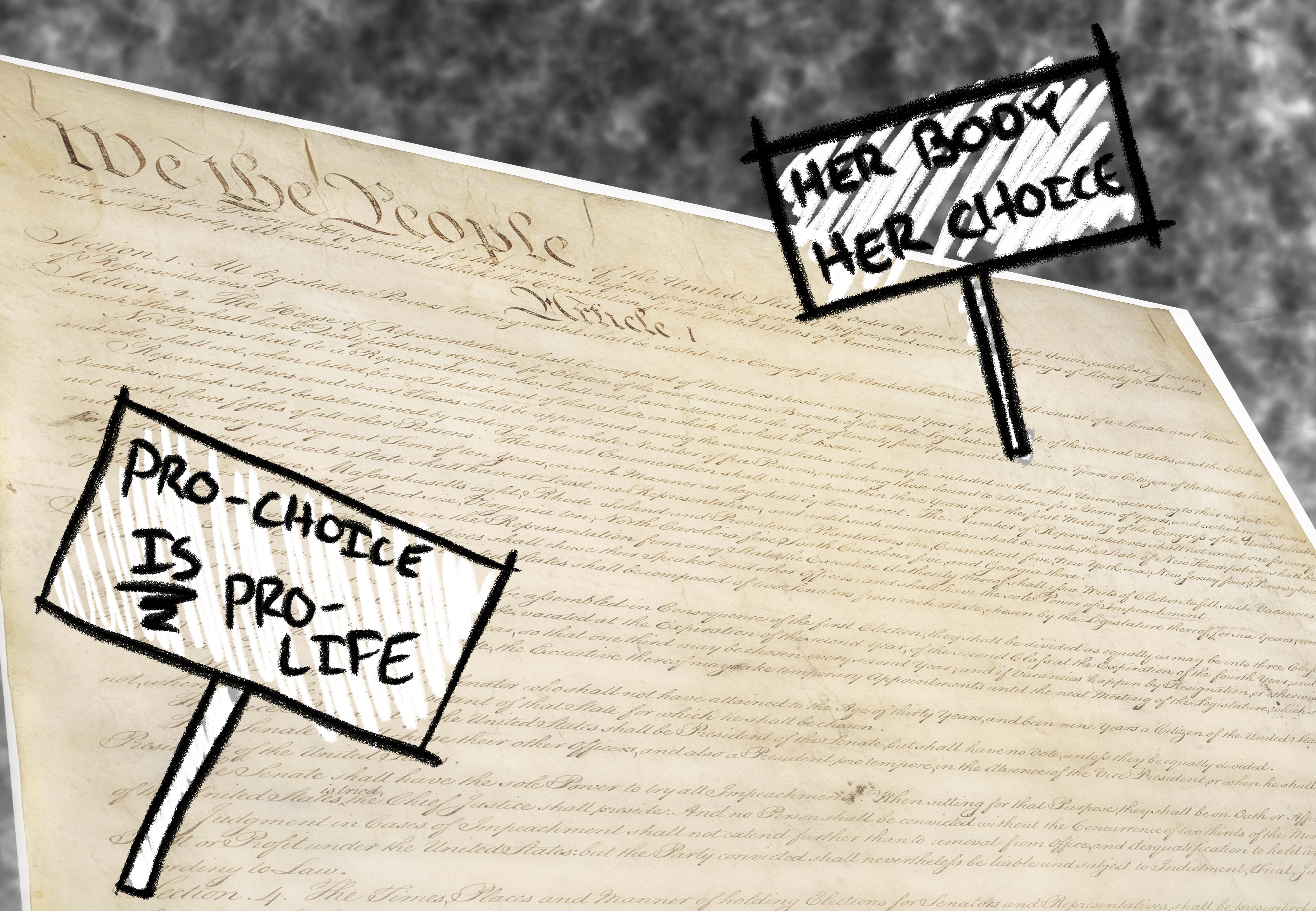 Over the long history of abortion debates in American history, there has become a clear divide between the pro-choice and the pro-life crowds. This discussion is one of the most salient topics in politics today and one that warrants consistent debate and thought. Or so most people think. In reality, in our legal system, there are no valid constitutional grounds to have near to total restriction of abortions.

The first famous case the Supreme Court dealt with in regard to abortion was Roe v. Wade in 1973 . For those out of the loop, Roe was a case that originated here in Dallas. “Jane Roe,” also known as Norma McCorvey, was the woman who challenged the constitutionality of a Texas state law that limited access to abortion. The law allowed abortion to be utilized only in situations where a doctor confirmed that the mother’s life was in danger and could only be saved by terminating the pregnancy. When the Supreme Court considered the case, Roe challenged the Texas law as being a violation of her privacy rights, as ensured by the First, Fourth, Fifth, Ninth, and (most crucially) Fourteenth Amendments. Because the Texas law stated that the woman was required to disclose to her doctor that she was pregnant, she argued that this was an unconstitutional violation of her privacy. The Supreme Court used a test known as “strict scrutiny,” which stated that the right discussed could only be regulated if the government could prove a “compelling government interest” sufficiently related to (meaning the law actually had to be aiming at what it was trying to regulate, not a side effect of another law) and be narrowly tailored to only affect the desired regulatory area (meaning the government cannot overstep and regulate too much). The fundamental right that the Court dealt with in Roe was the right to privacy, first introduced in Griswold v. Connecticut — specifically a woman’s right to terminate her pregnancy. The Court found that the Texas statute failed the strict scrutiny test and was thus unconstitutional. However, the Court did determine that the state could divide pregnancy along three trimesters, meaning that for the first trimester, only the woman could decide whether or not to terminate the pregnancy, during the second trimester, abortion was available for regulation but could not be outlawed, and during the final trimester, the Court ruled that the state could regulate and/or outlaw abortion (except in cases that required abortion to preserve the life or health of the mother). While many “pro-life” advocates allege Roe loosened abortion regulations to an excessive degree, that, in my opinion, is not true. A quick Google search leads me to the National Childbirth Trust, a United Kingdom charity, which estimates that the time for a woman to know she is pregnant could be around six weeks after conception. That’s 1/6 of the way through the pregnancy, which is halfway into the first trimester — not an insignificant amount of time. The Supreme Court also decided in Roe v. Wade to permit the state to overregulate access to abortions, as seen later in Whole Woman’s Health v. Hellerstedt (2016).

For almost 20 years, abortion law was static, until Planned Parenthood of Southeastern Pennsylvania v. Casey (1992). This case was somewhat similar to Roe in the rights it dealt with (the Fourteenth Amendment and privacy), but the facts were somewhat different. In Planned Parenthood of Southeastern Pennsylvania, a law mandated a pregnant woman sign a statement certifying she notified her husband that she was seeking an abortion. This law was challenged by the Planned Parenthood office. This same law also included provisions that required the pregnant woman (or the parent of a pregnant minor) be given informed consent “at least 24 hours before the abortion is performed,” and placed reporting requirements on facilities that provided abortions. The Court in this case did not flip precedent on its head, instead opting for stare decisis (that is, letting the previous decision and precedent stand). By doing so, the Court allowed Roe to be upheld in large part (some of Roe, such as the trimester system, was thrown out), and included some case-specific rulings that supplemented Roe’s decision. First, in dealing with upholding Roe, the Court affirmed that a woman’s choice to terminate her pregnancy was protected by the due process clause in the Fourteenth Amendment (“nor shall any state deprive any person of life, liberty, or property, without due process of law”), specifically mentioning that it is an individual right to be “free from unwarranted governmental intrusion into matters…affecting a person as the decision… to bear a child,” citing Eisenstadt v. Baird (1972). Speaking of the Pennsylvania law in particular, the Court claims that requiring informed consent and the pregnant woman’s husband violated the undue burden test, which asks whether the government has put up too many barriers or hoops to jump through in order to obtain a constitutionally protected right. In regards to the husband notification, the Court said that this requirement has the same effect as outlawing abortion, claiming that a too-significant portion of women will be prevented from getting the procedure by their husbands. The Court also states that the husband has no equal interest in protecting the fetus as “to the mother’s protected liberty.” However, the Court steps back from declaring the reporting and informed consent provisions (minus the parts including spousal approval) unconstitutional, arguing that there is no undue burden placed by these provisions, these hoops in particular are not too much to jump through. As briefly mentioned before, much of the technical aspects of Roe are thrown out; the trimester system was seen as too outdated to keep up with the current healthcare at the time. While the Court keeps the framework of Roe’s trimester system intact, the meat of the system is replaced with viability of the fetus to exist outside the womb. The Court holds that states cannot regulate before the fetus is viable outside the womb; and once the fetus is viable, then states can regulate, stating that a “woman who fails to act… has consented to the state’s intervention…” for the child. This decision is still not an overly liberal decision and is vague in establishing a precedent for future cases, instead having the moderate core of Justices Souter, O’Connor, and Kennedy writing the majority opinion. Yet, because it retained an individual’s fundamental right, it is seen as a major failing of the legal system by a portion of the population.

The latest case that was a landmark case on abortion was Whole Woman’s Health v. Hellerstedt, a case from 2016 most likely still in our memory as this was a Texas law (again) before the Supreme Court. The premise of the case was that the Texas state government passed a law that restricted the ability of abortion clinics to operate independent of hospitals. The Texas legislature did so by mandating that abortion clinics had to have admitting privileges to a hospital 30 miles or less from the clinic and comply to standards set for ambulatory/outpatient surgical centers (Texas H.B. 2, 2013). Essentially, the law mandated that abortion clinics have a doctor that was a member of a hospital that could admit patients to said nearby hospital, and essentially equated abortion with outpatient surgery. This law was challenged because it cut the number of facilities able to give abortions in the entire state of Texas in half, clustered in major metropolitan areas. Whole Woman’s Health challenged the law, using the logic from Planned Parenthood v. Casey, that this regulation placed an undue burden on the ability of a woman to have an abortion. The Court agreed, and struck down the admitting and surgical center provisions, citing the same information the District Court noted, that complications for abortions were extremely rare: not common enough to warrant such stringent regulation. All the additional regulation does, in the Court’s estimation, is place a “substantial obstacle” in the way of women seeking an abortion and an unconstitutionally undue burden on the women affected. Nearly 50 years have come and gone since Roe v. Wade was decided, and still there is no reasonable argument to be made for overturning the decision. There have been several attempts to do so, yet the legal arguments put forth have not had strong enough legal standing to justify their attempts. All the current legal standing taken into account, there is still one aspect that anti-choice advocates still fall back on: Though abortion may be legal, it is immoral. And yet they are still wrong. To restrict the choices of any individual, regardless of what said choice is, goes against one of the founding morals that the nation was founded on. The founders asserted that they had a right to choose what government they lived under. That morality follows to whatever choice a person may make, including abortion.

Wants to be the next Hamilton, just without the sex scandal.