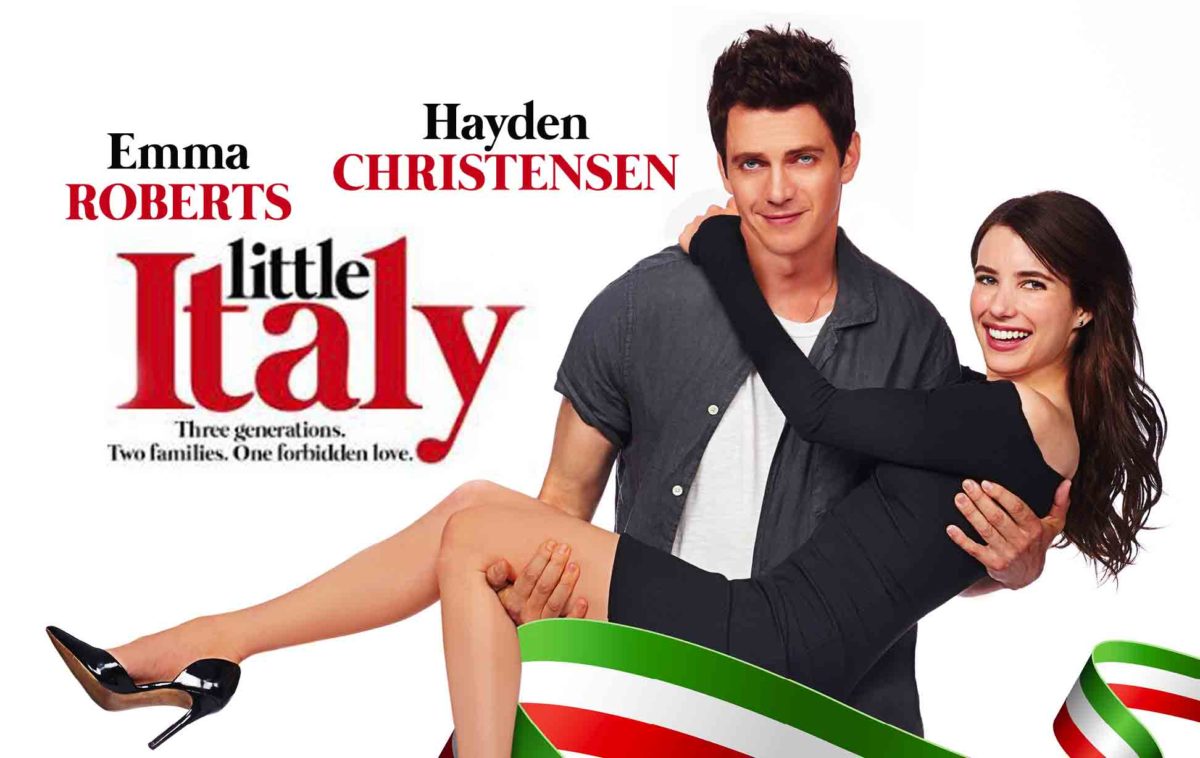 With Valentine’s Day right around the corner, we at AMP were looking for a real tear-jerker of a rom-com for this month’s film — tears of pain and wondering when our suffering will end, but tears nonetheless. The kind of tragic romance on the scale of the classics… say, Romeo and Juliet? Little Italy took that a step further by asking the question that’s been weighing on all of our minds: What if you made Romeo and Juliet a story about star-crossed lovers from competing pizza restaurants, and what if the story starred the famously Italian Emma Roberts and notorious heartthrob Hayden Christensen circa 2018? With that kind of premise, and a cast also including the likes of Andrea Martin, Alyssa Milano, and Jane Seymour, we simply had to give it a try.

What resulted was a nearly two hour long ‘will-they-won’t-they’ with enough sexual tension and racial stereotypes to make any sane person uncomfortable. The film opens with a voiceover by Roberts and Christensen’s characters, Nikki and Leo, where they banter about growing up in Little Italy — The Canadian one, obviously — where they spent their days harassing elderly neighbors with makeshift vegetable bombs to pass the time.Their families were best friends who ran a pizza shop together, but after one fateful pizza making competition, the families entered a war. “Yeah, a pizza war,” as the voiceover helpfully clarifies — one split between the family with better sauce (Nikki’s family) and the family with the better dough (Leo’s family). Eventually Roberts moves away to train under a prestigious Gordon Ramsey knock-off portrayed by Jane Seymour. Given the opportunity to open her own restaurant, Nikki has to go back home to Canada to obtain a work visa. On her first night back in town, she is reunited with Leo, who has remained a local. The two of them irreparably damage their livers during a drunken soccer match in the rain. The morning after the match, having drunk half of Little Italy’s liquor supply, Nikki wakes up naked in Leo’s bed. While Leo and his roommate both gaslight Nikki about sleeping with them after blacking out, we find out that neither of them slept with her, and she somehow took off her dress while asleep? This baffling horniness represents a theme that continues throughout the film.

In the next sequence we are introduced to Nikki’s and Leo’s families and friends. On Nikki’s side we have her parents Sal and Dora, as well as her grandma, Franca, a woman whose accent seamlessly slips between Italian and Russian (to give an idea of the uncanny feeling in this film). Leo’s family includes his parents, Vince and Amalia, and his grandpa, Carlo. Each family also sports a token Indian employee that, you guessed it, fall in love by the end and have no bearing on the plot other than making wildly racist and overtly sexual comments at not only one another, but unsuspecting customers. A diversity win if you ask me! The fathers are constantly fighting and sabotaging each other, even going so far as to spike the pizzas with marijuana, which leads to an extremely horny dance scene between an old woman and one of the Indian employees, Jogi, as well as Leo getting blatantly sexually harassed by a police officer.

But enough about horny old people, back to Leo and Nikki. Leo tells Nikki she has changed, because she has, those things do tend to happen when you move away and start your own life. Leo then proceeds to force her to rediscover herself by doing all the things they did when they were kids. Nikki begins to find out that maybe she really doesn’t want to become a successful restaurateur and that she just wants to make pizza with Leo. However, the feud between their fathers is just too great and after an explosive dinner between the two families, Nikki and Leo are forced to compete against each other in the same pizza-making competition that tore their fathers apart. During the competition, Nikki and Leo are going head-to-head when Nikki decides to swap her grandma’s secret sauce with Leo’s. Because of the blending of the two families’ specialities, Leo wins the competition and Nikki leaves to go start her restaurant in London. What ensues is a chase(?) scene that would have definitely resulted in every member of both families being arrested by the TSA (but in Canada, this behavior is apparently OK). Leo confesses his love for Nikki and asks her to stay, and even though she could have been fabulously successful in London, she stays with Leo to run a moderately successful pizza place in Little Italy.

Little Italy manages to somehow kill the last semblance of belief in love that we had and proves that sticking a lackluster Italian accent on a subpar movie somehow makes it worse.