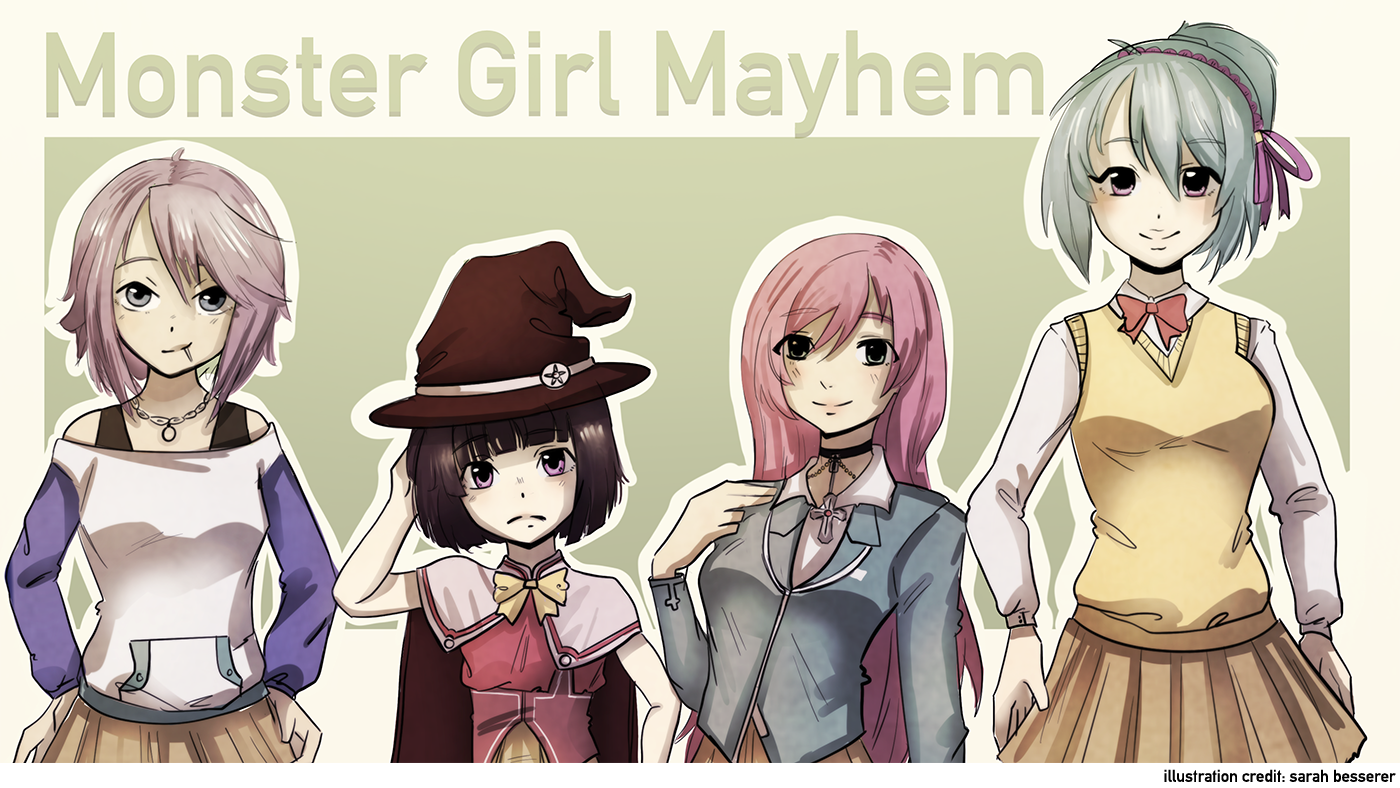 A major category of anime is the “harem” category. In this type of show, there is traditionally a single male protagonist that is surrounded by women who all want to be with him. Though not always sexual, the nature of a bunch of women wanting to be with one man leads to a lot of sexually suggestive situations. What any viewer could observe from just looking a little deeper are many toxic stereotypes that harem anime applies to women. Harem anime may also give viewers a sense of escapism that can hurt the development of adolescent male viewers.

As a middle schooler, I was introduced to an anime called Rosario Vampire. The central plot — and I use the word “plot” loosely — revolves around a human high schooler, Tsukune Aono, who is accidentally sent to a school for monsters. Throughout the show, he makes friends with several monster girls who all fall in love with him, and each girl in the show represents some type of male sex fantasy.

Moka is a vampire and is considered Tsukune’s main love interest. She is affectionate and loyal to Tsukune. She represents the woman that the viewer would inevitably want to end up with as a partner. A frequent joke from the show is that Moka is constantly drinking Tsukune’s blood. Therefore, in an albeit morbid fashion, Tsukune is able to provide for her. However, Moka is actually representative of two sexual fantasies. She has a second, darker side that she is able to release when her trademark rosary is removed. This darker side of Moka is cold-blooded and ruthless. She represents a sadomasochistic fantasy that lurks within men. While not explicit in its presentation, this side of people lies just underneath the skin. Similarly to how Tsukune has to remove the rosary from Moka, it is the trust that is needed to have a safe experience with S&M.

Kurumu is a succubus who feeds off of the attention of men. When she is unable to manipulate Tsukune into falling in love with her, she ends up falling in love with him. She represents a woman who has been promiscuous, yet still wants the affection of one man. There is a dominance theme in play in that a woman with experience wants to settle down with one particular man.

Yukari is an 11 year-old witch, and she unfortunately represents a host of sexual fantasies. The age of Yukari represents someone that Tsukune can take care of, even to a greater extent than Moka. Yukari represents almost a younger sister to Tsukune. She also develops romantic feelings for Moka, which eventually evolves into her wanting to be in a three-way relationship with Moka and Tsukune. I don’t think I need to explain what the fantasy is in that.

Mizore is a snow fairy that is seen as an outcast by the rest of the students. She is eventually taken into the fold of Tsukune’s…group. She represents a shy girl that needs to learn to come out of her shell — yet another way that Tsukune is needed. He helps her to become more outgoing and independent.

The blank-slate main character also shows up in another type of anime, commonly referred to as isekai anime. In an isekai anime, the main character will be transported from their boring, regular life and into a fantasy world. There they usually find themselves the hero with a cast of characters providing unwavering support for them, and sometimes wanting to have sex with him. Harem and isekai anime represent a type of escapism that many young viewers desire, and this is where danger arises.

Data from Crunchyroll, an anime streaming service, shows that they receive around 50 million visitors each month. More than likely, there will be a predominantly male audience for an anime like Rosario Vampire. As previously stated, the female characters are there to represent male sexual fantasy, and not to be multi-dimensional. For a young man still learning about relationships and how to relate to others, seeing these women fawning over a character that he is supposed to put himself in place of isn’t exactly healthy. The extent of the impact of seeing this of course will differ from person to person, but no one can claim that it hasn’t had an impact on some people. Hikikomori is a common Japanese term for extremely reclusive young male adults. Though there isn’t necessarily a specific term for it in America, it’s not difficult to observe these same reclusive traits in many of today’s online forums. As a personal anecdote, I was first introduced to Rosario Vampire as a middle schooler, a time where hormones and development are constantly assaulting the body. At an age where I still didn’t know what relationships were like, shows like Rosario Vampire were really the only exposure I had to “relationships.”  I was lucky that I was eventually able to navigate my sexuality and relationships in a healthy way, but I would be lying if I said that watching a show like Rosario Vampire didn’t alter my thinking patterns in some way.

This article isn’t meant to be alarmist, and watching Rosario Vampire isn’t going to make you a shut-in who treats women like meat. However, the impact of developing adolescents can’t be ignored. By presenting these sexist ideals of women, shows like Rosario Vampire are setting up young men for failure in their future relationships.