Red, Blue, Green, and the Case For Better

Red, Blue, Green, and the Case For Better 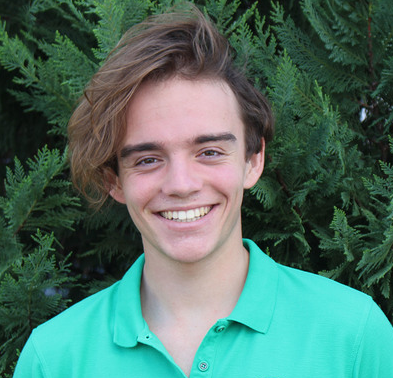 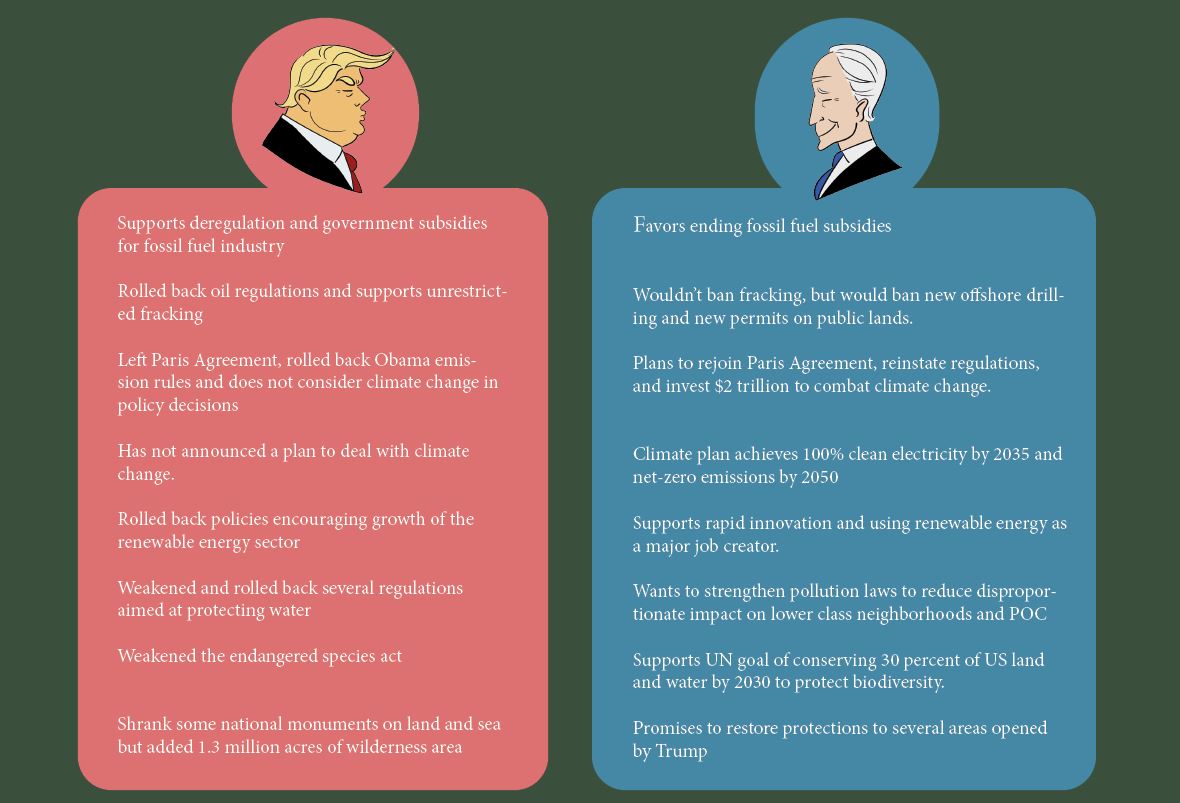 There’s a lot on the line in this election. With the looming threat of climate change and ecological collapse, it is imperative that politicians seek bold action and strong solutions. But are those solutions being offered?

Let’s look at the candidates’ histories and proposals for the environment. For the purpose of this article, we will only be exploring the two main candidates (Spoiler: otherwise, the Green Party would win and it’s not even close), and I encourage you to do your own research as this list is not comprehensive.

Joe Biden’s Clean Energy Plan would put $2 trillion into a set of research and development goals throughout his first term with the principle goal of achieving 100% renewable energy by 2035 and net-zero carbon emissions by 2050. He wants to modernize American infrastructure, invest in clean energy, and prioritize climate focused advances in the transportation industries to increase job opportunities. He claims that his plan for the auto industry will create 1 million new jobs with union options.

While I won’t discuss the racial implications of climate policy explicitly, it is important to note that Biden specifically addresses environmental justice and pledges to allocate 40% of his Clean Energy Plan’s investment towards POC and low-income communities, who are often most affected by pollution and climate change. The plan would create a division within the Justice Department that serves to regulate and penalize corporations directly for their environmental effects on communities.

Although Trump says his priorities are clean water and air, he’s worked to boost US production of oil and natural gas. It is notable that he is currently presiding over the country’s record clean air and the largest drop in carbon emissions (10%), but these are part of a longer-term trend and directly an effect of the pandemic. He has supported additional funding for national parks and public lands, passing protection legislation and putting $38 billion towards “clean water infrastructure”.

That being said, the president has denied the existence of climate change despite scientific consensus and his administration worked to scrub mentions of climate change from government websites. He has reversed many Obama era climate policies, backed the coal industry despite its long-term decline, and his presidency has been accompanied by a broader trend of deregulation attempts.

A CNN national poll in April showed that climate change is the most important issue for Democratic primary voters. At a base level, it seems accurate enough to say that Joe Biden offers better policies on the environment in order to combat climate change. The question is not “which candidate is better?”, that answer is obvious. The question is “is it enough?” So let’s focus on the “pro-environmental” candidate and his shortcomings, as Trump’s environmental policy speaks for itself.

Given that Biden took office in 1970, it’s worth looking back at his record of environmental policy. Throughout his time as a Senator, Biden earned a lifetime score of 83% from the League of Conservation Voters due to his support of various environmental and clean energy legislation such as backing provisions to limit greenhouse gas emissions. In 1986, Biden introduced the first ever climate change bill in the senate, the Global Climate Protection Act, which was signed into law by Reagan the following year and directed the government to research and develop a strategy to deal with climate change. Perhaps most instructive is Biden’s involvement in climate policy during his tenure as Vice President under Barack Obama, especially given his rhetorical callbacks and nostalgia for a pre-Trump era.

The Obama administration began in 2009 with the American Recovery and Reinvestment Act of 2009, allocating more than $90 billion through loans, loan guarantees, tax credits, and grants for projects such as developing better batteries and weatherizing homes. During his tenure, Biden was tasked with overseeing its implementation. After a carbon cap-and-trade bill failed to clear the senate in 2009, the administration didn’t touch climate change until well into Obama’s second term. The Obama/Biden administration joined the Paris climate agreement in 2015, which, while considered a signature accomplishment, was largely a performative gesture given that the agreement was a loose framework of preventing climate change and involved no binding commitments.

During the same time, however, the Biden/Obama administration did very little to thwart the growth of fossil fuels in the United States. In fact, the largest expansion of natural gas production in US history happened during Obama’s presidency, lifting the 40-year-old crude oil export ban, licencing liquefied natural gas export terminals, and openly boasting about low gas prices. Obama even criticized Mitt Romney (R) in 2012 for saying that coal plants kill people. Yes, Obama is not running for president. However, given Biden’s goal of “returning to normal”, it’s a safe bet to use the Obama administration’s climate policy as a lense with which to view a potential Biden presidency.

A major talking point during the Democratic primary was the Green New Deal – a progressive and bold plan that aims to aggressively tackle climate change but also encompasses other issues like social and racial justice, jobs, housing, and healthcare. Joe Biden has explicitly denounced this deal despite its large support from the left and from people who usually are non-voters, a mistake that could potentially harm his election chances and, more importantly, not do enough in order to combat climate change. Working with Bernie Sanders in a unity task force and activists like the Sunrise Movement, Biden has committed to some, but not all of the task force’s recommendations.

“Joe Biden’s climate plan isn’t everything, but it isn’t nothing at all,” says Varshini Prakash, founder of Sunrise Movement.

Biden has made it abundantly clear that he supports fracking, allegedly with the goal of winning the Pennsylvania vote. However, scientific consensus is that hydraulic fracturing, a drilling method for extracting underground gas, is a major crutch for the fossil fuel industry and causes extensive and dangerous ecological damage. He also chose to hire Heather Zichal, Obama’s deputy assistant for Energy and Climate Change. However, Zichal earned more than $1 million as a board member of a natural gas company. In short, he seeks a middle-ground lackluster approach, watered down to appeal to moderates, simultaneously alienating progressives and endangering the planet’s future.

Biden’s climate proposal might have broad support from committed Democrat voters, but it isn’t good enough. His focus on carbon capture and storage represents magical thinking and is a lifeline to a dying energy. Instead, we need to be focusing on a rapid transition to renewable energy and ridding ourselves of fossil fuels. Attempts for any sort of “moderate” or “middle ground” approach are dangerous. We need bold action, and we should be asking for better.