Whooshing Red: Beyond the Ballot Box

Whooshing Red: Beyond the Ballot Box 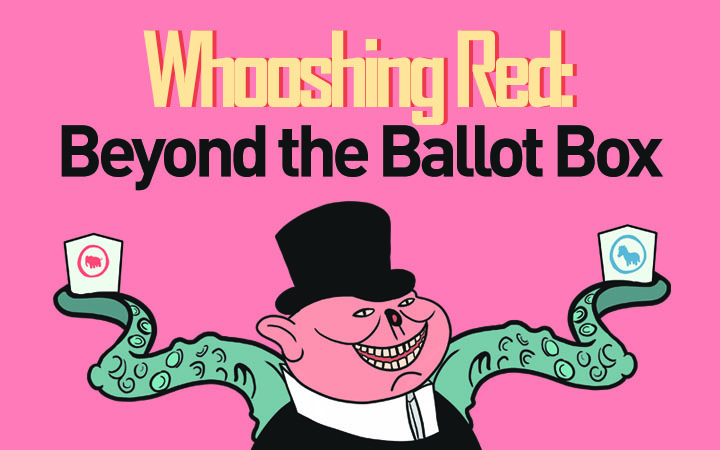 Voting is a ritual. You walk into the polling place, take your seemingly-incomprehensible sheet of bubbles and numbers, slide it into the machine that makes sense of the chaos, and that’s the climax of two to four years of repressed political frustration. Voting is a ritual, and American society is intent on ritualizing it more. Voter ID laws. Suspicious “whoops—you voted Republican” antics. Flash drives of ballots lost in city hall basements. Polling places that close at random. Open polling places with three-hour lines—but not if it’s a private school! And we still get the perennial reprimands from the devoted, priestly elite: “vote or else”. At this point, only the priestly elite can actually manage to vote.

For the vast majority of people, there’s another ritualistic aspect of the franchise: the sympathetic magic of it. If I keep putting the Scantron in the box, eventually—eventually!—things will get better. My vote is definitely worth as much of the vote of a Florida boomer with nothing better to do and a polling place with a five-minute wait (does wearing a QAnon baseball cap count as electioneering?)

The thing about sympathetic magic is that, like all magic, it’s mythical. It relies on correspondence—the idea you can influence something based on its resemblance to another thing. If it feels like a political expression, then it has to be a political expression. The American vote, too, is sympathetic magic. Marx summarized the entire experience as “deciding once in three or six years which member of the ruling class was to misrepresent the people in Parliament.” In our case, it’s two or six years, and the parliament is called Congress.

The problem isn’t necessarily the ritual itself—the ideal of true democracy is noble, valuable, and worth fighting for. The problem is the investment. Millions of good, honest people stake their wellbeing on the outcome of the incomprehensible, manipulable black box of vote counting, and millions of good, honest people are mentally ruined every four years. Standards of living keep slipping. Wages keep stagnating. And through it all, this reactionary state continues to show contempt for our basic existence.

Inside this political closed-loop, repeating itself over and over, only one question really matters: how do we break the cycle? How do we stop subjecting ourselves to the same hurt, the same degradation, the same whims of the same few white conservative boomers who keep making our choices for us? The answer is simple. We have to act on society directly. We have to think outside the ballot box.

We’re taught from a young age about what democracy is, the right way. The way that won’t have FBI agents show up to your door and “politely ask” you some questions. Democracy is the ballot box; if someone’s liberal, maybe the occasional protest. Do you vote? You’re a good citizen. No? You don’t deserve to complain about the boot on your neck. So we’re faced with the obvious question: how exactly should we think outside the ballot box?

First off, it’s important to distinguish organization from mobilization. Kwame Ture defines mobilization as the quick, lightning-rod gathering of the socially conscious around a specific issue. Mobilization tends to be big and newsworthy, but also short-lived, and often doesn’t result in structural change. Organization, however, is less flashy—it’s the groundwork of group-building and community aid that cultivate lasting relationships. Organizations that understand both, which organize to last and capitalize on mobilization to grow are the ones that induce the structural change we need.

This naturally brings up another question: how can I start building one of these organizations? Can I join an organization that already exists? There are plenty of organizations out there that are doing visionary work—even several on campus, such as the YDSA and the SJP. Alternatively, if you find a niche, or an issue, or any real topic of organization that you don’t feel is being represented or tackled by any existing groups, you can always organize a group yourself.

Organizing sounds like a complicated task, but—if you look at it fundamentally—it’s just connecting with people. An organization is, at its basic level, a group of people who enter into common relationships for a certain cause. Find a few of your friends, friends who believe in the same cause as you, and you already have a rudimentary organization.

Whether you join an existing organization or become the nucleus of a new one, putting your head down and putting in the work for your goals is an amazing start. What that “work” is, however, depends on your cause.

“Theory” can be any aspect of work that revolves around studying what you’re organizing around and how to organize around it. Activities like reading groups, book clubs, even presentations could count as theory—if it’s studied in a semi-academic way, then it’s theoretical work. Good theoretical work will help the organization keep a clear focus and a solid plan for achieving its goals.

“Praxis”, meanwhile, is direct action to advance your group’s causes: demonstrations, food/toiletry drives, things that get you out into the wider world to act. Any work that actually, materially pushes forward the cause of your organization, even in a very minor way, is praxis. Good praxis makes your group an actual, physical force for change.

Of course, how exactly these two would look in action depends on the field you’re working in, and any organizer should study the precise situation they want to redress to come up with appropriate solutions. Not every attempted solution will work; the key is to aim the attempts as precisely as possible, and if they go wrong, study the situation more and revise the plan. Your focus should always be on the situation at hand, not on your preconceived notion of it.

Above all, remember what your organization is fighting for. Always remember that it has a purpose to fulfill, a clear intention; otherwise it wouldn’t have been started in the first place. An organization losing direction—whether that’s from lack of enthusiasm, loss of the media limelight, or anything else—is a dying organization.

This doesn’t necessarily mean that an organization’s direction should be static. In fact, not changing the thrust of a group when the circumstances change is often responsible for an organization losing direction. An organization has to adapt to changing conditions, or else it’ll look out of touch. The important thing is that an organization always has to have a direction, a vision to achieve. Then your group will have a unity of purpose, a clear direction to work towards, and a reason to exist.

The people you’re working with also need to know about the direction of the group. More importantly, they need to know what direction the group’s heading in while an organization is shifting direction. An action organization, like any group, works best when everyone involved is on the same page. When they aren’t, you’ll have internal conflicts, rivalries, and disputes that, if you aren’t careful, could tear the whole group apart.

So work towards your goal, whatever goal that is. Have a direction, but have a direction that can change with times that are changing rapidly. Know what your organization exists to do. Make sure everyone in the organization knows what it exists to do. And, if you ever achieve that goal, don’t assume that your work is done; your group’s interests might still need defending.

The Death of the Ballot

Voting is fine. Voting is good. Democratic expression in general is good. Go to a polling station, mark your checkboxes, and be counted, if you feel driven to. The ballot can, especially in the short term, help lessen the burden of our current, oppressive world-system and keep the most vulnerable safe.

The issue comes when the vote is viewed as the end-all-be-all of political involvement as it has been in our schools, our media, and our socially-conditioned mindsets in general. The ballot is a limited way of expressing political preference; every choice, no matter what, will preserve the status quo with more or less distortion. It’s even more limited in a country like the United States, with a two-party system entrenched not just by convention, but by the basic operation of the law.

We live in an open society—at least on paper. This openness is beaten down at every turn, sure, but it exists on paper, and the forces we deal with tend to bend more than outright break the rules. As people who want a better future, we need to take the fullest advantage of this we possibly can. We need to organize openly and push openly for a more democratic society using any forum possible. We need to act, and act with intention, to truly build a new world.

By all means, fill out your Scantron in the computerized voting machine as you like. Do it in a way that minimizes harm. Feel free to take it to the counting machine, watch it zip in, and wonder if your ballot really counted while you walk out of the polling place. But remember that progress isn’t a ballot measure. It’s something which takes real effort and real commitment outside of the theater of electoral politics, built on the struggle of thousands of organizers, and each one’s contribution is worth as much as a thousand votes. It’s us who will build the world we live in; it’s us who can overthrow it.

As Marx said: “Philosophers have only interpreted the world in various ways; the point is to change it.”