Whooshing Red: America After the Rain

Whooshing Red: America After the Rain 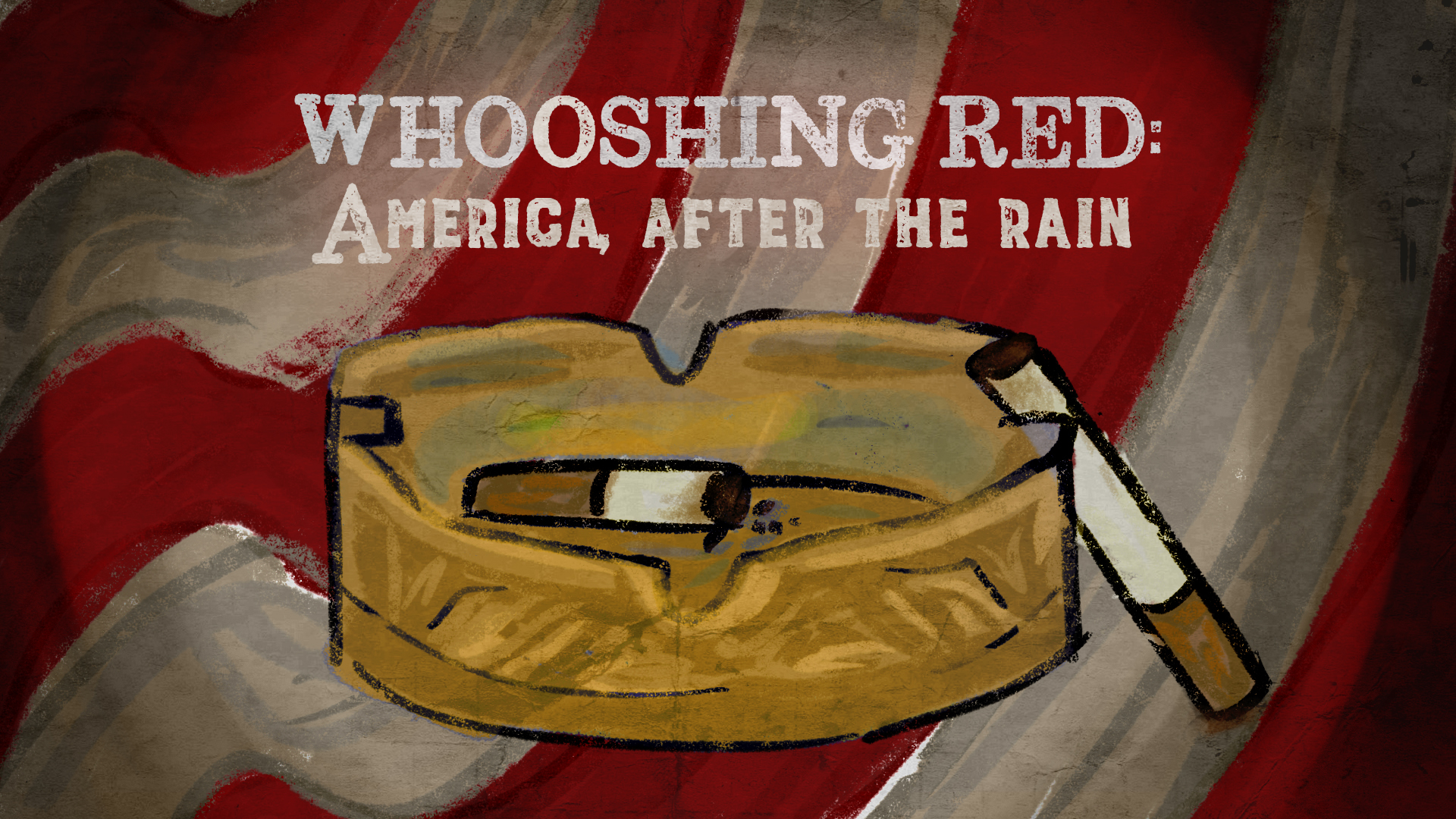 So much relies on a pint of Austin Eastciders and a pack of American Spirit menthols on an election night.

The people the next table over analyzed at each other, talking about how long a certain area on a certain map would stay a certain color. I knew I shouldn’t have been there, but our apathy was palpable. The pandemic hadn’t become invisible, but something that had precipitated into part of the social terrain, manifesting in mall visits with a mask, restaurant dining with distance, and Drafthouse pints on the patio. To Hell with the early November late evening chill; the soft, dreamy nimbus clouds overhead suggesting a coming rain. We were already living in it.

That’s how I justified the 9 p.m. dash for drinks, at least. Really, I felt a desperate need to exist in space with other, physical people – partly to have a front row seat to the inevitable chaos we all felt was coming, partly to not feel so alone in the face of the sheer mass of politics.

The mass exists everywhere, sinks to the family dining room, seeps into the ways we think of other human beings, and smothers us. It oozes out of every crack and crevice of 2020’s facsimile stage production of a society. Politics has gained a sense of social weight which often isn’t felt in American society.

Feelings of impending dread feel almost unspoken. They manifest only occasionally, when the teenaged cashier at the fast food counter asks if you watched the debate last night with a nervous laugh. In the 1950s, William Faulkner summarized the driving question of contemporary literature: “when will I be blown up”? Now, the question is “when will I be rounded up?” When will the jackboots come down Main Street? When will the United States enter its terminal decline into inhuman horror?

But this vision of politics – as an oppressive, unpleasant dread that just needs a good push to lift – isn’t just flawed. It’s fundamentally upper-middle class. From a certain position, the office blocks and maker spaces of the hip Gen Xer, politics is like sewage, only occasionally bursting from the septic tank and leaking into the dining room of the McMansion. But the sewage always remains. The septic tank is always leaking. Only occasionally do these liberal-leaning yuppies see fit to tend to it, and when they do, they often do so as a sports match or as a temporary fixation.

It makes sense from a certain perspective. The wealthy office worker or startup professional knows their life is good. But they know just as well that their paychecks are contingent on an insecurity in employment that hangs over them like a sword of Damocles. The creative nature of their work encourages social freedom – but their position in the economy is fragile. And they know it. The 21st-century social liberal is born.

Social liberalism – the belief in social freedom, but moderation in all other things. It’s a very fitting ideology for a digital-age petty bourgeoisie, constantly insecure in employment, existent contingent on neoliberal globalization – but still reliant on diversity due to the needs of their creative work. In fact, “petty bourgeoisie” obscures some of the reality – so many of these people are just well-paid proletarians, desperate to maintain their good wages.

But who else, really, does social liberalism serve? It’s a testament to the U.S.’s material progress that so many people are in the middle-to-upper-middle strata. But on whose backs is that material progress built? What about the countries who are couped every other week by an army of intelligence acronyms to keep the cost of laptop production low? What about the vast service proletariat within the U.S. – one often composed of the Black, the indigenous, the Latine, the Southeast Asian, the queer?

The fact is, in a modern context, social liberalism isn’t an advocate for the well-paid proletariat. It’s a hospice nurse. Because even as these open-space office workers run to social liberalism to ensure the security of their jobs, the inherent conservatism of the ideology constantly makes concessions to international capital. And with each concession comes more layoffs, more wage cuts, and more jobs sent to India to gain a higher rate of exploitation. And worse, this coexistence of austerity and social progressivism breeds a party with the exact opposite persuasion – a fascist one.

Politics manifests among us, socially, with a certain mass. And it’s often an unpleasant mass, one that feels foreign, that needs to be told to leave like an unwelcome houseguest. But we forget: the mass surrounds us. It hasn’t seeped into the floorboards; it exists inside them. It is not only the molecules in the wood; it is the force that binds them. The jackboots will not come down Main Street, because they already have. In fact, they built the road.

For most people, the round-ups have been here. American police officers abuse anyone they perceive as weaker with impunity. American security agencies have created a worldwide surveillance regime that the Stasi would have perceived as inhuman. In our own, all-American concentration camps, we coerce migrant women into sterilization. It all tastes of Josef Mengele. A fitting comparison, considering his post-war exile in U.S.-aligned Argentina and Brazil. Or more so because the Nazis cited the United States as an inspiration.

Everything has political content. The production chain of the pint of Austin Eastciders. The itinerant labor that harvested the tobacco for the American Spirit menthols. Our houses have a political story inside of them. The zoning laws which define the lots. The contracts which allowed it to be built. The homeowners’ associations which declared proudly that only Caucasians would be allowed in the community.

We obscure the political nature of our reality often; occasionally because of our own inability to grapple with it, but more fundamentally because obscurantism is what benefits the most powerful people in society. And the response to this realization, that we live on stolen land, that our houses were built with the blood of Black slaves, that our crops are grown by Latinex farmhands, isn’t despair. It isn’t ostentatious lamentation, in the hope that a display of apology will solve 400 years of oppression.

The 21st century is one of vast contradictions. The ever widening gap between those who own and those who work; the monopolization of every domain of human activity under watchful corporate eyes; the continued existence of racism, misogyny, homophobia, transphobia, ableism, and every other kind of bigotry; the intensifying exploitation of countries like Bolivia and the Congo to fuel our “digital revolution”; the increasing tribalism of the U.S.’s two political parties, arguing not over differences in policy, but over fealty to the capitalist ideal.

Every single one, in the vacuum left by the collapse of the socialist bloc, has festered to become wounds so profound that they’ve merged into the background radiation. A socially liberal President Biden can’t heal them. Neither can a Vice President Harris. Not because of the enormity of the task, but because the class they represent – nominally the upper-middle, but often just the more “progressive” parts of capital – has vested interests in maintaining the status quo. The cruelty is the point.

In the absence of any real prospect of a savior in the government, there are really only two things that matter. The first is revolution; the second is what must be done to achieve it.

Revolution is the historical mission that falls to us, the heirs of the 21st century. We might not even think about it consciously. It manifests in the family businesses permanently closed because of a virus allowed to run wild. It manifests in the interstates, the crown jewel of 1950s America, which are crumbling like so many Roman aqueducts. It manifests in our friends, who can’t find work, or resort to drug abuse, or have their spirits broken out of an inability to find meaning in a world that seems absurd. And it manifests in the right-wing think tanks, already scouring the youth for spokespeople misguided enough or avaricious enough to give the walking cadaver that is late-stage capitalism one last breath of life.

Revolution. It’s up to us to fulfill it, or betray it, in our own peculiar ways. I got home, locked the door frantically, and stared at the livestream of Wolf Blitzer on the flatscreen. The fate of humanity rested on the voices of 15 rural Wisconsin small business owners. I turned off the television, and fell into bed.

I don’t remember if it stormed that night. But when I woke up, the skies, despite everything, were clear.