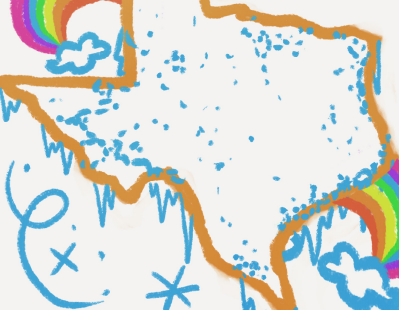 Hey, stupid. Yeah, Texas, we’re looking at you. We’re laughing at you right now, actually. Your latest disgrace is all over the internet, but especially on Twitter. Curious that it snowed over there. You mean, Texas really voted for Trump a second time? You freeloaders wanted to send America right back into the Dark Ages? Well, you didn’t win the election, so you had to make do with power outages! Send tweet!

Now, you may be one of the least educated red states in America, so we don’t blame you for not understanding complex ideas like politics, but you should’ve known your little MAGA piddle party wouldn’t last. Not every state’s full of idiots like you. Some states actually voted along the good party lines, and they won. So when the most distinctively Republican state in the Union — yeah, we won the Civil War, too, get over it or secede! — suddenly goes through its worst snowstorm in all of recorded history… we can’t help but laugh. Sorry, but it’s true! Hell literally froze over, just to teach you guys a lesson about common sense. If you didn’t want to see mass power outages and water shortages, especially during an economy-shrinking pandemic, you should’ve done a little something called voting for the good guys.

Yeah, I said it. The pandemic is no excuse when all the young people and minorities in Texas sit at home being useless every four years anyway. It was your fault that your conservative little state stayed red. Gerrymandering wouldn’t be an issue if all you “young’uns” voted against your conservative parents. So what if mail-in voting was stifled last year, and you were too busy working at your $7.50 minimum wage ‘essential’ job to wait for hours in the cold at one of the two polling locations in your county? Sounds to me like you cucks will give up your right to vote for anything! Ha. It’s almost like the few competent Texans around never even managed to fill out a ballot. I bet you all just stayed home and prayed for your choice of candidates. Ha! Ha ha! Send tweet! (Take notes, Texas, ‘cause left wingers actually know how to meme.)

It’s interesting how we get along just fine up north, with Texas record-breaking amounts of snow every single winter, because we vote for people who actually run our power grids properly. Specifically, people who connect our power grids to the rest of the United States. Yeah, wouldn’t you hicks like to have a cold-proof electricity supply? Too bad the blue states can’t share with you! Maybe you shouldn’t let yourselves be gerrymandered half to death by the same greedy oil barons every election year, who got your power grid to secede from the Union before you had the pleasure of doing so yourself. Oh ho ho, bazinga! Send tweet again! We can’t feel bad about dunking on you guys so hard, when you’re that easy of a target!

Out of the goodness of our hearts and our historically entrenched left-wing political organizations, we tell you time and time again, exactly what to do and who to vote for. We see the Texans on the internet agreeing with us, and wishing they could move here! And even with factors like a diverse population, and a global trend toward youth voting, Texas is clearly too stupid to turn blue. Now your electric bills are in the five-figure range, but that’s not going to stop you from voting in every red-faced mutton chop in the state. Ted Cruz could’ve personally snapped away 50% of all Republicans, and you’d still be voting Republican with the chicken scratch your government used to draw your voting districts. Hell, there could be a literal elephant running for the Texas Senate and everyone would vote it in, as long as it was a Republican! (Heh. I’d tweet this one, but it’s just a little too realistic to be funny.)

Frankly, we have no hope for you. And we’re starting to think it’s better for everyone that way. We have our own problems with human rights and wealth inequality up north, but we don’t have to go through the pain of actually dealing with them when we can dip into whataboutism, and compare ourselves to big honkin’ red states like you. You’ve been a predictable Republican vote for years, and you never flipped despite all the media hype about Hillary Clinton and Beto O’Rourke, even when you had immigration reform and bipartisan cooperation on the table. Frankly, this hardline red stance doesn’t work for you at all, and it’s starting to seem like maybe you don’t have a choice in the matter, but hey! You like the lack of change and constant mishandling of state funds, and we like shitting on you for it. Why change what works for us?

Of course, it’s very important for everyone that Texas remain a red state. If Texas wasn’t the shame of the United States, the natural order of the country wouldn’t be maintained. We’d have to actually talk about issues like Charlottesville, and the bubbles of white comfort we call Portland and Denver. We’d have to discuss the fact that the North is full of sneakier racists than the South. Where would we blue states find a politically expedient enemy for our Twitter two minutes’ hate? And who would be the woke babes of American democracy in our stead? Let alone the fact that, if Texas ever had a real chance of flipping blue, we wouldn’t get to use your political suffocation for Twitter clout. Yes, people are dying. We liberals can’t really maintain our mindful reputation without that.

So, actually keep on burying your snowstorm casualties, Texas, and keep on being your glorious, gridlocked self. Your inescapable sacrifices, your citizens who would rather die than submit to federal power grid regulations, and your gerrymandered little voting districts are all a noble sacrifice for the rest of the United States. You may not be benefitting from community support or pre-disaster plans, but you don’t deserve those anyway, because you’re our big red scapegoat. Imagine Texas actually using renewable energy as a buffer against the wild meteorological swings of climate change. Or having non-Republicans in major positions of power through some semblance of a democratic process! Haha, couldn’t be you! Thankfully, when all is said and done, we’re pretty sure that kind of revolutionary political change will never happen in Texas.

Welcome to Hell, I’ll be your host.