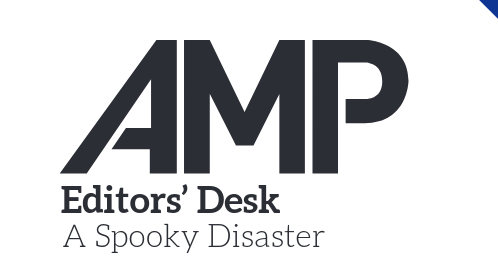 Happy Halloween Comets! We here at AMP would like to discuss some of the scariest and spookiest things that happened last month. Starting off: the 2021 Met Gala; the horrors were truly endless. There was poor fashion choices and badly timed, poorly attempted political statements. The theme was American Fashion, and somehow the crowd of mostly American celebrities completely missed the mark. Besides a few exceptions here and there, these celebrities could’ve done much better. We wanted to see Barbie and Ken, Beyonce at the Superbowl, a Ronald Reagan look-alike, maybe even someone dressed up as a red white, and blue Sherman tank. Just something that truly represented… America. And also, more cowboys! What happened, Little Nas X? Either way, we’ll just have to wait till next year to once again fashion police millionaires from the comfort of our homes. And of course, some of Hollywood’s revolutionaries chose this moment to make their political statements. Congresswomen AOC wore a white dress that had “Tax the Rich” written on it. Twitter did not hold back to remind her she was wearing this dress while attending a gala where a ticket alone costs thirty thousand dollars. Many felt that some self-proclaimed leftists will do trivial things like this to distract from the importance and the severity of the matters they claim to care about. And they often pull these stunts in very ironic ways, which does describe what AOC chose to do at the MET gala (even though it turned out that she got in for free). Supermodel and profound feminist revolutionary, Cara Delevingne wore a corset that had the phrase “Peg the Patriarchy” on it. This girlboss moment also went viral on twitter for being another unnecessary political/cultural stunt that doesn’t actually correlate with actual anti-patriarchal ideals. Labeling penetration as humiliating domination is actually much more patriarchal than Ms. Delevingne may have considered. Speaking of patriarchy, the Texas Senate has found yet another way to display their hatred of women. On September 1st, Texas Senate Bill 8 was made law. This bill blocks abortions after the 6 week mark of pregancy—when a heartbeat is usually detected and before most people even know they’re pregnant—except in medical scenarios. This is one of the most draconian anti-abortion bills in the US, and it’s recieved a lot of backlash for being unconstitutional. Many believe this bill is the first shot in a campaign to use the Supreme Court’s conservative majority to overturn the landmark Roe v. Wade decision. It’s also very disappointing to see the bill was proposed by a man and primarily voted on by other men. Men who will never get pregnant and never have to make that decision themselves. It’s also important to note that those who are considered upper class (like most of the state senators who voted to enact this bill) have a very good chance of still accessing an abortion for pregnant mistresses or teenage daughters. It will just be those who are lower class and can’t afford sudden out-of-state travel who won’t be able to access abortions. Don’t forget to remind these state senators who they work for next election! In the meantime, we should all do what we can to make their lives difficult.