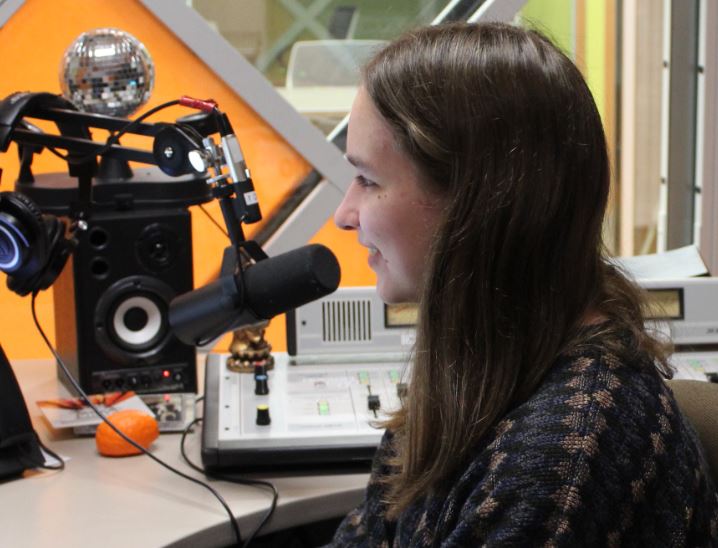 Maizie Croom, host of Radio UTD show 69+ Love Songs, joins AMP’s Sebyul Paik for a casual chat that happened to be recorded, transcribed, and published in both print and web formats.

Sebyul Paik: How’s it feel to be DJ of the month?

SP: That’s fair. So, you have the greatest show title of all time: 69+ Love Songs. How’d you come up with your show title?

MC: There is an album titled 69 Love Songs by the Magnetic Fields that came out in 1999 and it’s 69 songs long. I love that album. And so I was like, ‘I’ll probably play more that 69 songs! So I’ll just add a plus.’ I get compliments for it — people say it’s like, “clever” — and I don’t think they know that I stole it from an album title, so I feel like a fraud sometimes.

SP: But then it’s referential! That’s extra clever, if you think about it. So how would you describe the vibe of your show?

MC: I think I usually go for chill, sometimes sad. A lot of the times it’s kinda sad. My goal was to play love songs, but I quickly sort of abandoned that because I wanted to play other songs. But I think I generally have a romantic tone. Sometimes it gets really folksy.

SP: Yeah, I listened in last week. Lot of Joni Mitchell. Not a bad thing! Just the vibe. So yeah, can you give some examples of artists you like to play?

MC: I guess the mainstays of the show are like, Sharon Van Etten, I’ve played her a lot; The Magnetic Fields obviously, my namesake; Joan Baez; Crooked Fingers, they’re a band from North Carolina that I really like.

SP: How and why did you get involved in RadioUTD?

MC: I’m a freshman — which surprises some people, because I guess there aren’t a ton of freshmen who are full DJs — but I wanted to do college radio since high school. Partially because I grew up in a college town in my early childhood, and so I enjoyed hearing the weird music that would be played on Raleigh’s college radio station. And then also neither of my parents had cars that had aux or bluetooth or anything, so up until like 2 years ago or so, it was only radio for like any drive. So I have a lot of appreciation for the radio.

SP: Yeah, I completely get that. DJFest was this past Wednesday on 4/20! You had a set, right? How’d it go?

MC: It was a good time to just hang out with all the Radio people, and hopefully inform other students that student radio is a thing that exists. My set was a bit of a mood changer, because almost all the other DJs were like electronic, EDM stuff, and then I was… it wasn’t full folk. I brought the energy up a little from my normal show. But it was just like, indie rock. So it was interesting to play it in the middle of other people’s sets.

SP: What are some of the influences for the music you play?

MC: I’m very influenced by my mom. She’s always been a big influencer of my music taste. It waxes and wanes sometimes, but right now I’m feeling very connected to her preferred genres. She used to make me listen to hours — like we’d sit down together and watch hours of music videos on her laptop. It’d be a lot of singer-songwriter stuff from the 90s sometimes, and that’s very the attitude I have right now. I also try and follow the folk music “scene,” which is very intellectual and kinda lame… But NPR is my good friend. Folk Alley, run in conjunction with NPR. The Smithsonian Folkways branch also — if you wanna listen to music from the 1930s, they’re my go-to.

MC: Yeah. Songs From the Civil War. I’m listening to those!

SP: Gotta play some of that on 69+ Love Songs. Okay, how would you say your music taste has evolved over time?

MC: For a lot of high school, I was just like only listening to pop, like hyperpop specifically. Heavily electronic and stuff. I listened to a little bit of indie rock on the side. I used to say that I would balance it out. So I’d listen to a little bit of Charlie XCX and a little bit of Julien Baker so I wouldn’t go fully depressed.

SP: Sorry, was Julien Baker your vibe to not get depressed???

MC: ‘Cause I’d balance it out with Charlie XCX! But then in 2020, at the start of the year I just got super depressed and I couldn’t listen to “loud music” anymore. So I stopped listening to Charlie XCX as much, stopped listening to all the hyperpop and stuff, and that’s when I got really into folk music. It was really just very calm. And I connected to it, emotionally.

SP: Would you like to leave our readers with any final music recs?

MC: Angel Olsen’s new song is really good, “All The Good Times.” I was listening to it earlier today. Banger. The Dead Tongues. I’ve played them a lot on my show ‘cause they were listed as ‘new music’, and I’ve become obsessed with them.

Interview has been edited for clarity. 69+ Love Songs is streaming at radioutd.com/tuner on Tuesdays from 6PM-9PM.