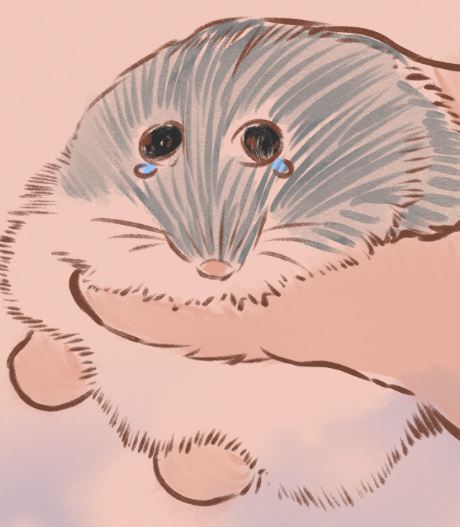 Many people see hamsters and fish as great beginner pets, especially for children. How hard can it be? All you need for a hamster is a small, colorful, plastic cage and some packaged food, right? What could a small betta fish need more than a bowl, water, and some cheap fish flakes? But these small animals need more than you may think. Most of the fun plastic cages advertised for hamsters in big chain pet stores are not actually suitable for hamsters at all. Betta fish need at least a 5 gallon tank to thrive. Goldfish are pretty demanding pets, and single tailed common goldfish can get up to a foot long, which is much larger than most fishbowls.

Hamsters need more space than you may expect. Depending on the size, a hamster can require between 2800 square centimeters, for small Roborovski hamsters, to 4000 square centimeters, for large Syrian hamsters. However, one of the most popular hamster habitats listed on PetSmart’s website has just about 1040 centimeters of floorspace. This is not suitable even for the smallest of hamsters. Hamsters need adequate space for their physical and mental health, and spaces too small can lead to stress and anxiety. Some hamsters may even develop “cage aggression,” where they become extremely protective of their space, when they are stressed out to the point where they could be attacking you for sticking even a finger into their enclosure.

Many hamster enclosures also come with a lot of metal wire ladders and platforms. This is not a good idea. How would you feel if you had to walk on metal wiring with your bare feet? Trust me, your hamsters don’t enjoy it either. Solid surfaces are much more comfortable for both you and your hamster to walk on, so do your hamster a favor and stay away from metal wire surfaces. Especially, stay away from wire wheels. Hamsters running on a wire surface vigorously increases the likelihood of cuts and scrapes, which can eventually lead to infections. Wire wheels are an all too common sight at pet stores, but you should stay away from them out of the health and wellbeing of your beloved pet.

Packaged hamster diets full of corn, oats, and other plant products are also a common sight at big box pet stores. Although these are good for a part of your hamster’s diet, they shouldn’t be all they get to eat. Hamsters are omnivores, and protein is a very important part of a complete hamster diet. Adding a protein source, such as dried crickets or mealworms, will make your hamster a lot healthier, and they will love eating it too. Hamsters will also benefit from fresh fruits and vegetables. Variety is an important part of your furry friend’s diet. Don’t just settle for dry, packaged food. Your beloved rodent will thank you for it.

Betta fish are a common college dorm room pet. They are perceived as easy fish that don’t need a ton of space. I’ve even seen some people put them in old liquor bottles. Not only is this dangerous because there could be traces of alcohol left in the bottle that can harm your fish, but the average liquor bottle is not nearly enough space for a betta fish. The absolute minimum tank size that most people in the betta fish hobby agree on is five gallons. This is not just because fish need space to swim around, although that is very important for their health and happiness. Fish eat, sleep, breathe, and defecate all in the same water. When you leave a fish in a small amount of water for too long, they quite literally choke to death in their own poop. I don’t know about you, but that seems like a quite unpleasant way to go out to me. That being said, a five-plus gallon tank is not enough. Frequent water changes are also necessary to keep your fish’s environment as clean and breathable as possible.

Although betta fish and hamsters require more care than the average beginner expects, I don’t think they’re bad beginner animals. As long as you have the proper knowledge and supplies, betta fish and hamsters can be fun, low(ish) maintenance first pets. However, one common “beginner” animal that I would never actually recommend to a beginner is goldfish. One common myth many people believe about goldfish is that they grow to the size of their enclosure. This is a half truth. When put into an improperly sized enclosure, a goldfish’s health suffers, and their growth is stunted due to this. The small, cute goldfish you see at pet stores are almost always babies, and they can eventually get up to 12 inches long if they are properly kept. Common goldfish are treated a lot like betta fish in the pet hobby, but their care more resembles that of a koi fish. Goldfish and koi fish are actually distantly related, and they are both descended from carp. Would you keep a carp in a fishbowl? I wouldn’t, and I wouldn’t keep my goldfish in a bowl for the same reason I wouldn’t keep a carp or a koi in a bowl.

Another reason I wouldn’t recommend goldfish to beginners is because they excrete a lot more waste than other common pet fish. As stated before, fish can choke on their own poop and die if the level of ammonia from waste in their enclosure gets too high. In order to properly care for these fish, the owner has to have the knowledge and experience in keeping the waste levels in the water down. With just how quickly a goldfish can pollute their enclosure, the amount of work that goes into keeping the water healthy can be overwhelming for a beginner fishkeeper. On top of all that, goldfish are social creatures, so these issues would be magnified in a proper environment, as there would ideally be two or more goldfish living with each other in their enclosure. Unless you, as a beginner, are prepared to make a large investment in supplies and knowledge, you should stay away from keeping goldfish in your first aquarium.

Hamsters and fish make great pets. Hamsters are fun to watch and interact with, and fish are beautiful display animals that have a lot more personality than most people realize. However, these animals come with a lot more responsibility than most beginners are prepared for. Although we are used to seeing these animals in the tiniest, cheapest enclosures, these animals require and deserve better. Proper research is imperative before purchasing any animal. Whatever pet you end up getting, make sure you know what really goes into their proper care. Although we all have the best intentions for our furry (or scaly) friends, misinformation can harm or even kill them.

I believe homeowner's associations should be abolished.