I Am Here To Make Friends, Actually

I Am Here To Make Friends, Actually 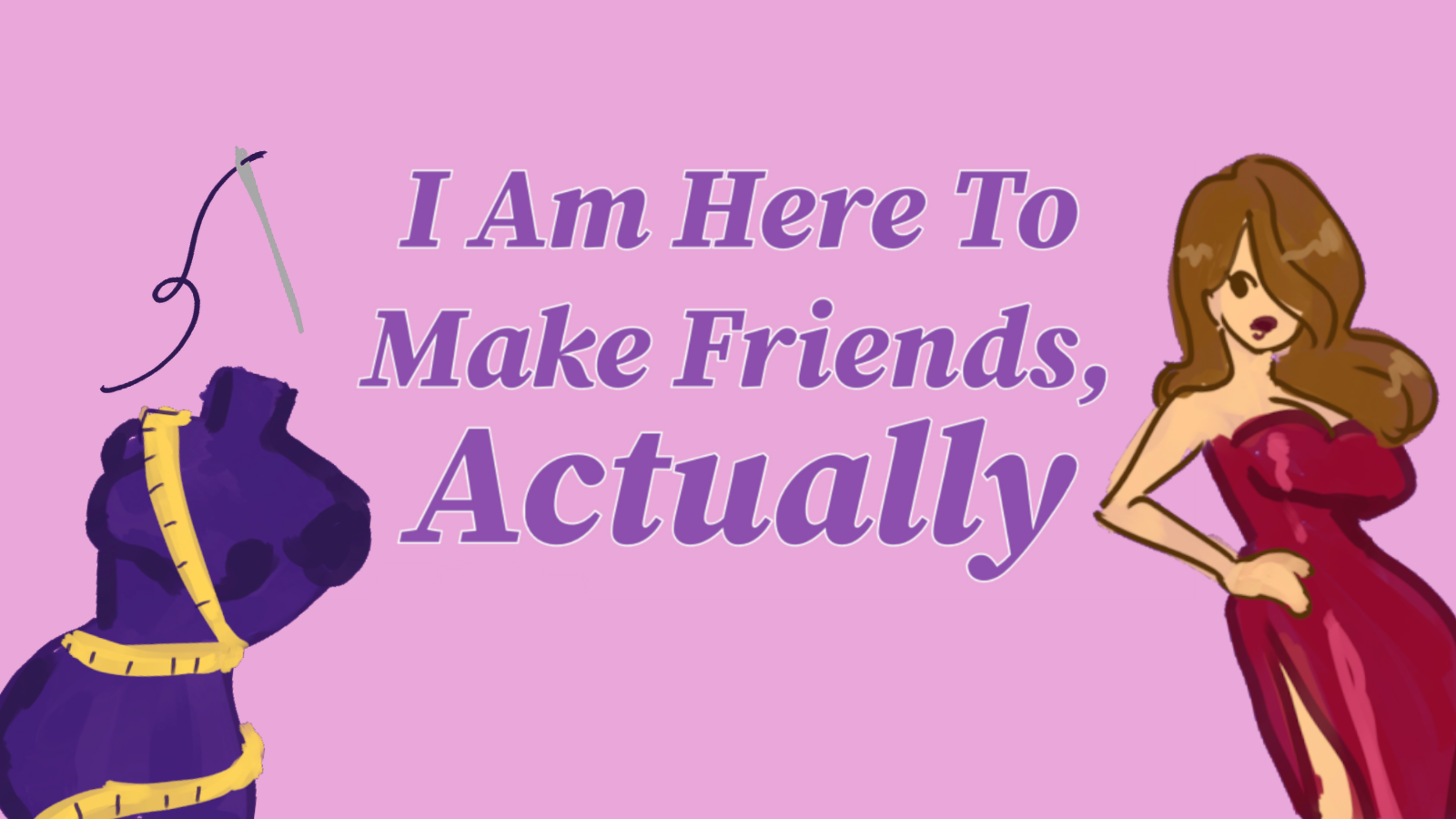 “I don’t know, in my day I don’t think we helped each other,” Christian Siriano, winner of Project Runway season 4, commented as he strolled past contestants frantically trying to finish the final details on their outfits. With only minutes before their models were set to walk the runway, one designer had casually offered to help another with some last-second sewing. The contestants in question laughed Siriano’s comment off, but he had a point—anyone on season 4 of this show would have just let their competition fail. As it turns out, a lot has changed since then.

Reality TV first emerged as a distinct genre of television in the 90s, but it wasn’t until the early 2000s that shows like Survivor, Big Brother, and American Idol launched it into the core of the American zeitgeist. These shows thrived on cutthroat attitudes and “survival of the fittest” competitions. Contestants may have formed alliances, but in the end there could only be one winner, and people were more than willing to cut down both friends and foes if it meant being the last one standing. Even non-competitive shows like Keeping Up with the Kardashians and Say Yes To The Dress thrived on drama and personal conflicts. Until recently, the phrase “I’m not here to make friends” was the genre standard.

Of course, it’s not that every individual person featured on each of these shows just decided to be cruel and catty towards each other. Over the shoulders of each contestant, Kardashian-Jenner, and real housewife stands the boogeyman of every reality TV show, The Producers. From their shadowy spots in the background, The Producers are able to feed people lines, egg on their trash-talk, and cut all necessary context out of the footage. If drama is what the people want, then The Producers are sure to give it to them.

The first episode I saw of Project Runway was the season 8 premiere, which first aired in July of 2010. I watched in rapt horror as the designers arrived on set for the first time, still holding their suitcases and backpacks, and were told to pick out one article of clothing that they treasured and loved. And then to pass it to the person next to them, who would have to tear it up and repurpose it into their own design.

It was an obvious ploy by The Producers to sow chaos and bitterness among the designers, before they even had a chance to introduce themselves to each other. And of course, it worked. One contestant immediately began panicking about the “yet to be worn” thousand-dollar garment he had to give up. Another had to witness a designer carelessly cut up her one-of-a-kind modernized kimono, then clumsily redrape it into something far uglier than it started as. Grudges were formed immediately, and were only amplified by The Producers pulling off their signature trick- forcing all participants to live together.

While viewers at the turn of the millenium might have assumed that everything being said on TV was a genuine representation of those people’s character, today we know better. A couple decades of former reality TV star interviews and the advent of social media have revealed the truth about these shows. The atmosphere on these sets is specifically cultivated to cause tension and frustration, in hopes of The Producers being able to get as many clips of people badmouthing each other as they need to cut together an entertaining episode of TV. On top of that, one or two contestants are consistently picked by The Producers to be the “villain,” meaning that even if that person got along just fine with everyone in real life, the final cut of the show will make it seem otherwise. As it turns out, there is very little of real life in reality TV.

However, as much as we would love to blame this entire era of TV on a mysterious group of vicious Hollywood professionals, the truth is that the only reason The Producers worked so hard to create an environment of cruelty is that there was a demand for it. The media that is popular in a given time period and place is a direct reflection on the culture of the people living in that era, and means Americans of the early to mid 2000s wanted to see fierce individualism and bitter competition.

Like so much of 21st century American history, we can partially trace this back to the September 11th attacks on the World Trade Center in 2001. In a post 9/11 world, not only was American nationalism on the rise, but so was individualism. Americans were suddenly obsessed with media that was about surviving the end of the world (particularly if they got to cut down the others in their way). Pop culture was wildly oversaturated with zombie apocalypse movies, wilderness survival shows, and awful country songs about “living off the land.” But as the nation’s memory of 9/11 has faded, so has the individualist fervor that once possessed pop culture.

During the quarantine of the last year and a half I managed to binge a truly unholy amount of reality television. And as I worked my way through backlogs of Say Yes to the Dress, Food Network Star, and of course, Project Runway, I started to notice something fascinating: the world of reality TV, once so cruel and cutthroat, was slowly but surely becoming kinder.

This couldn’t be made more clear than through the stark differences in tone between seasons 16 and 17 of Project Runway. The contestants on season 16, which aired in 2017, are immediately on the offensive towards each other. From episode one, they make disparaging remarks about each other’s fabric choices, garment designs, and mannerisms. The judges’ criticisms are consistently more rude than constructive, and they have no respect for the designers themselves. There are a few competitors that like to help each other out, but it’s by no means the norm to offer your assistance to anyone else. In confessionals (where subjects give commentary on the events of the episode), it’s clear that the contestants are being asked leading questions in an effort to get them to bad mouth each other, and that most of them don’t mind complying.

Season 17, on the other hand, marked a notable shift in the show’s history. After The Weinstein Company’s bankruptcy in 2018 (yes, that Weinstein), NBC acquired the rights to the show. Many changes came with season 17’s change in production company, the most notable being longtime host Heidi Klum and mentor Tim Gunn leaving the show to start a similar design competition show for Amazon. With their absence came a new cast of younger, fresher mentors, hosts and judges, including supermodel Karlie Kloss as host and season 4 winner Chrisian Siriano as mentor.

In the season 17 premiere, which aired in 2019, there are two contestants that the camera immediately singles out as being less skilled than the other designers. The first is Frankie Lewis, a kind, bubbly, self-taught designer who casually mentions that she’s been living out of her car the past few weeks. The second is Cavanagh Baker, who disdainfully remarks that $250 is “not enough to shop” for the materials to sew a single outfit.

But while other designers rush to Frankie’s side the moment she asks for assistance, at no point does anyone offer Cavanagh help. When asked about this in confessionals, contestant Afa Ah Loo laughed and said, “Frankie is really warm to everybody and Cavanagh… she does her own thing.” When six designers volunteered to help Frankie finish the final details of her outfit backstage, and Cavanagh was still working on hers alone, she still didn’t ask for help, remarking later that “In long term, and in business, the only one that can help you is yourself.”

At the end of the episode, Cavanagh and Frankie are in the bottom two, but for her creativity and risk-taking, Frankie is allowed to stay and Cavanagh is eliminated. However, the judges note that if Frankie’s piece had been any less finished, it probably would have been her going home, and it was only because she asked for help that she got that much done in the time she had remaining. The show’s decision to reward someone who was kind to others and asked for help instead of someone who tried to do everything on her own is a far cry from the earlier seasons of the show, where contestants were purposely and constantly driven to cut each other down for their own benefit.

Although we can’t give it full credit for this cultural phenomena, the beginnings of this shift can probably be traced back to around the same time The Great British Bake Off started airing in the United States in 2014. GBBO, as it is often abbreviated, features about a dozen competing amateur bakers, and is famously low-stakes and low-stress. There is no money at the finish line, just the sweet prize of being Britain’s best non-professional baker of the year. GBBO has gained massive popularity in the US, particularly since it became available for streaming on Netflix, and is likely somewhat responsible for convincing The Producers that American audiences would be receptive to some nicer shows.

Other than long-time network shows like Project Runway and GBBO, the newest wave of softer reality TV shows are not “television” at all, but direct-to-streaming service shows produced for like Netflix and Amazon Prime. Shows like The Circle, Nailed It, and Next In Fashion (Netflix’s own Project Runway ripoff) are putting an emphasis on more lighthearted, friendly competition. Even on The Circle, where subjects can only communicate through text and are actively encouraged to “catfish” each other, the winner was still decided by the very real and meaningful bonds they had formed.As time goes on, it’s becoming clear that Americans are valuing individualist ideals less and less. The events like the pandemic and the freeze last February have only exacerbated this, having made it abundantly clear that the way to survive the end of the world is not by cutting each other down, but by working together. Shows like Survivor are slowly losing viewers by the million each season, while  The Great British Bake Off grows more popular each year. We can only hope that this shift in pop culture is bringing a shift in the nation’s political leanings with it.