We Attended Ayn Rand Con So You Don’t Have To

We Attended Ayn Rand Con So You Don’t Have To 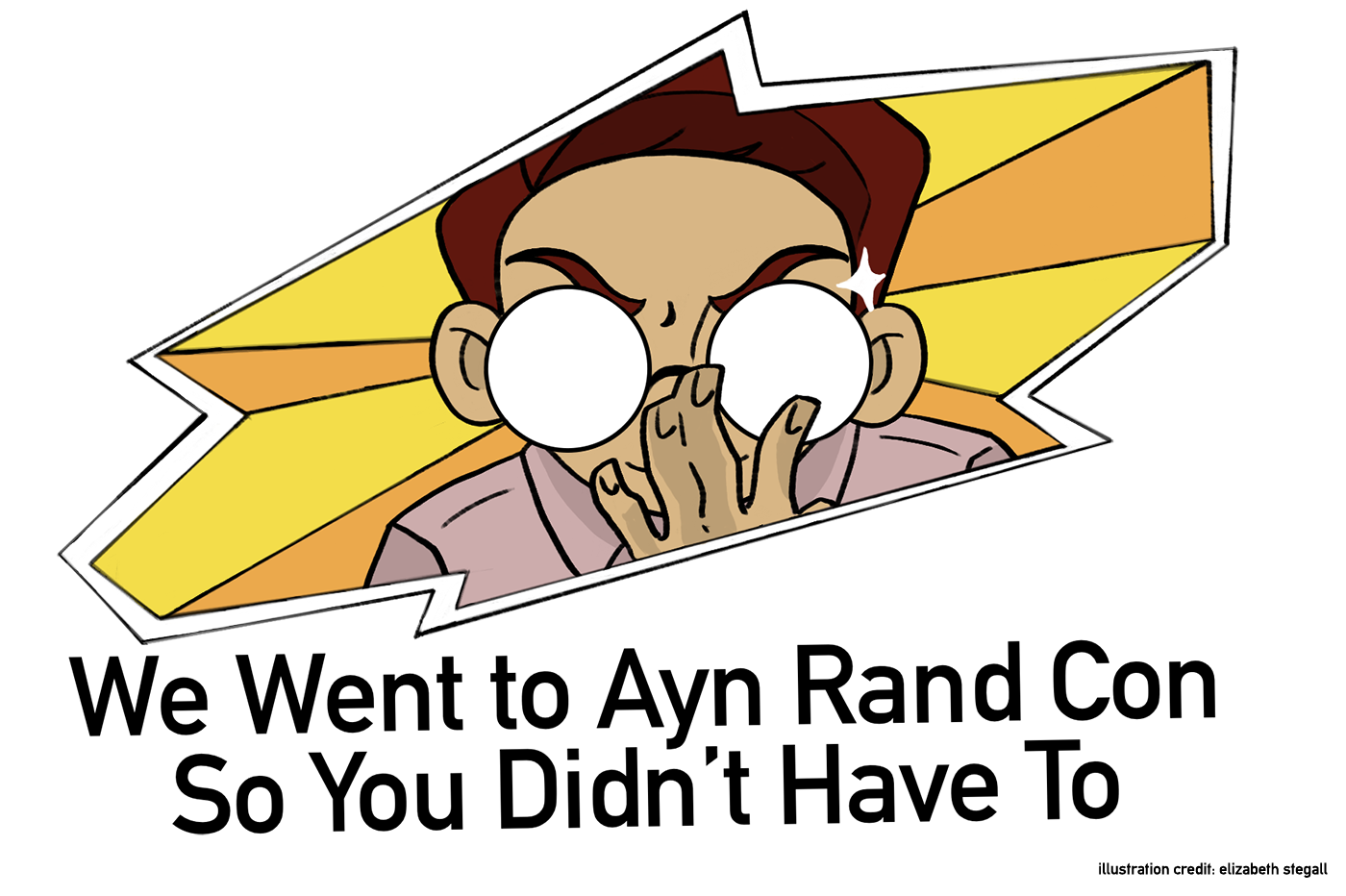 Are you a liberal? A socialist? A conservative? An effective altruist? I have bad news for you: According to Ayn Rand Con, you’re all irrational collectivists, and part of the problem.

Ayn Rand, an author and wannabe philosopher best known for her development of Objectivism, led a train wreck of a life. She’s a guiding influence in conservative thought, but supported abortion and gay marriage, and hated religion, which she deemed “irrationality.” She’s an even bigger influence on libertarians, in spite of her frequently denouncing them as “anarchists.” She was an author, but her most popular works were condemned as “remarkably silly,” even by conservative reviewers. However, Ayn Rand’s most lasting “achievement” was Objectivism, a strain of anti-collectivist thought that advocates for embracing greed as the premier moral virtue, and dismisses altruism as dangerous and evil. Although it’s generally a terrible philosophy that’s rejected by serious academics and intellectuals, Objectivism continues to be embraced by folks who tend to already hold an egocentric view of the world. It also wields a strange amount of influence on the modern Republican Party, in spite of Rand’s liberal-leaning personal beliefs.

Backed by strong ties to the secretive Koch brother network and millions of dollars of funding to spread this ideology, the Ayn Rand Con is part of ongoing efforts by the Ayn Rand Institute to promote this awful view of the world. As part of the Institute’s strategy to reach young adults, the event was completely free of charge for college students. The conference invite promised us exciting talks on “The Virtue of Selfishness” and “The Evils of Altruism” as well as, ironically enough, a free lunch. In spite of having to wake up at 8am on a Saturday, we decided to go, because why not at this point.

After signing in at the hotel venue, we were invited to take a copy of one of Rand’s books, along with the other available Objectivist swag. Although this contributed to the Ayn Rand Institute’s habit of buying thousands of copies of her books to keep them on the bestseller list, I decided to take one — I was short on toilet paper, and needed an alternative.

After this, we headed to the conference room for the first talk of the day. The first thing I noticed was that the room was pretty small, with about 40 to 50 people packed into a pretty small space. The second thing I noticed was that the room was actually half the size it could have been, with another conference behind a thin divider wall. They sounded like they were having more fun than us. In spite of the opening keynote on how Rand’s values allow one to truly experience life, the audience was drop dead silent.

The talks for the day were: “What Makes For a Life Worth Living?”, followed by “The Virtue of Selfishness” and “The Evil of Altruism.” Each of these talks hit upon an important facet of Rand’s philosophy. For example, the first talk let us know how embodying Objectivism is the only way to truly live life to the fullest. The second and third talks hammered in how if you redefine “selfish” and “altruism” to mean something idiotic, then you can kinda sorta justify being a shitty person that only cares about themselves. The talk on “The Evil of Altruism” also  included a bit where the speaker attacked a philosopher’s claim that not supporting malaria nets in poor countries was selfish. The speaker responded to this assertion by saying in a very enthusiastic voice: “He’s right, it is selfish! And that’s a good thing!”

The Q&A portions of the convention were both the saddest and the most amusing. One guy asked if marriage could truly be compatible with Randian values. A woman asked for advice about how to indoctrinate the preschoolers she taught. One man asked a question about global warming, which led to the speaker suggesting that the scientific consensus on global warming was just a repeat of the supposed historical scientific consensus on eugenics.
Probably the best question — as well as the best moment of the convention — was when a man asked if we would still be fighting socialists in the distant future, suggesting that it’s “harder to get a crack addict off of crack than it is to get a socialist off socialism.” This prompted the speaker to give a long-winded reply in agreement, admitting that “Socialism is inevitable, if we don’t kill off the idea of altruism.” Which, surprisingly enough, I agreed with — although not in the way I think that the speaker wanted me to. Eventually, my friend and I were released for the free lunch, leaving us scarred but at least content with our knowledge that socialism is inevitable.

Cooper and Erin are definitely quarantined and probably drunk