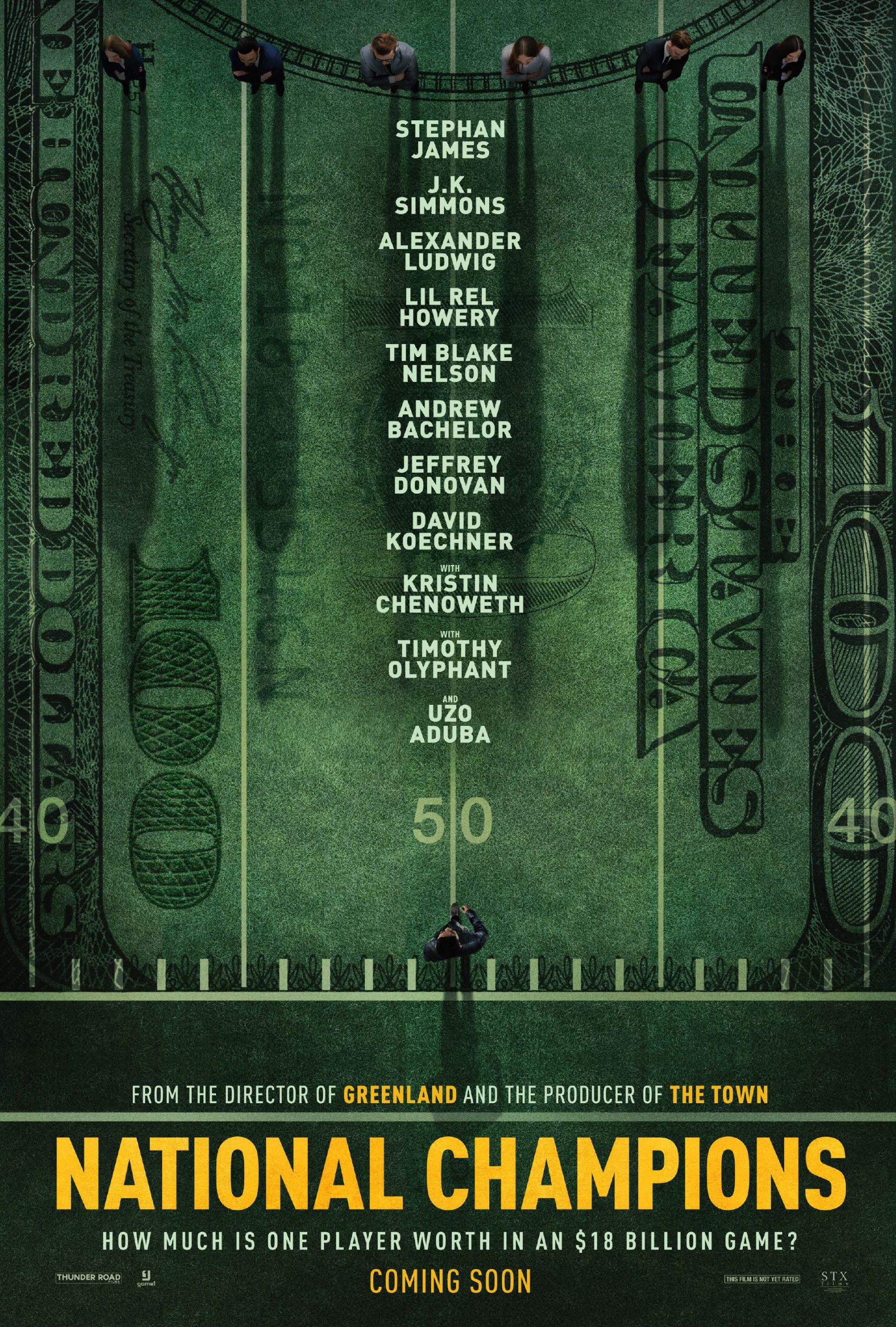 While I was sitting in the theater to see National Champions, a new American sports drama starring Stephan James and J.K. Simmons, a guy behind me was asking loudly, “So this is just gonna be The Program, right? But with like, Whiplash?”

If you know nothing about this movie other than the fact that it’s about football and that it stars J.K. Simmons, you might assume that. But this is far from a classic college football movie like The Program. Simmons does get to do a lot of the trademark yelling he became known for in films like Whiplash, but there’s actually shockingly little football in National Champions. In fact, no one plays football in this movie at all!

Originally based on a play of the same name, ​​National Champions (2021) is about college football players trying to unionize. With his trusty country-boy sidekick Emmett Sunday (Alexander Ludwig), quarterback LeMarcus James (Stephan James) must confront what he’s willing to give up for the greater good.

The film takes place during the three days before the national championship team as LeMarcus attempts to start a players’ strike, and demands the NCAA start classifying student athletes as employees. Instead of the dramatic touchdown scenes the guy behind me was expecting, the audience was treated to two hours of people monologuing at each other about the pros and cons of workers’ rights. And it was fantastic!

National Champions is shockingly timely. Unlike the plethora of movies pretending COVID-19 never happened, this movie tackles real-world events head-on. “They’re gonna Kaepernick you,” one player tells LeMarcus after he announces his boycott of the game. They were of course referring to Colin Kaepernick, an NFL player who gained national attention for protesting racial injustice, and can no longer find work. The film even confronts the legacy of American slavery, pointing out that although college football is dominated by black players, the vast majority of the people profiting off of it are white.

The promotional material frames the conflict as two-sided, but really there’s only one side that the audience can root for— LeMarcus’s. The arguments that Coach Lazor (J.K. Simmons) and the NCAA representatives make are paper-thin. They definitely don’t give any good reasons for paying laborers minimum wage or workers compensation (hint: there aren’t any). The movie wants the audience to cheer for LeMarcus and his strike, and for the rights of the real college football players being exploited.

In a year where strikes and the low-wage “labor shortage” continue to dominate headlines, National Champions is more than just timely, it’s bold. It’s completely unafraid to talk about race, class, and the exploitation of workers. Our protagonist is not interested in slow, gradual progress, nor does he expect to be a one-man movement. LeMarcus calls for radical change and collective action, and he refuses to back down.

“This is capitalism at its finest! This is greed at its worst!”

Wow! Those are words I didn’t expect to hear in any major motion picture this year. Especially not from Golden Globe Nominee Stephan James, who does a stellar job at bringing LeMarcus’s complex character to life.

And he’s not the only one acting his heart out. Despite working on a shoe-string budget, National Champions manages to pull together an all-star cast. Just to name a few, Kristin Chenoweth, Timothy Olyphant, Uzo Aduba, and King Bach (you know, from Vine?) are all featured heavily. Every member of this cast is a seasoned pro.

Audiences might show up to see Simmons as a harsh-yet-caring coach, but every single actor in this movie is bringing their A-game. LeMarcus and Emmett’s brotherly dynamic is a special standout, with Lugwig’s character providing key moments of comedic southern charm in an otherwise tense movie.

The main thing dragging this film down is its awful production quality. There’s an Oscar-award-winning movie somewhere on the cutting room floor of National Champions, but it’s covered up by a completely unnecessary expositional sequence, out-of-place dramatic music, and obnoxiously shaky cameras. The plot also gets annoyingly convoluted towards the end, as multiple attempts at raising the stakes with gimmicky plot twists get muddled together.

Despite all that, this movie is still definitely worth seeing! If not for its incredible acting, then at least for its cultural relevance. Social justice and workers’ rights are at the forefront of American consciousness, but those are rarely ideas we see reflected from Hollywood. To address these issues explicitly is already a bold move, but to market it towards dudes who like football movies? National Champions is far from a perfect film, but it’s certainly one that matters.