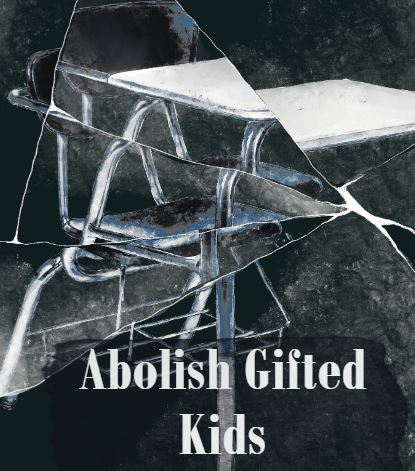 In first grade, I was admitted into my school’s ‘Gifted and Talented’ program. Once a week, I got to spend the entire school day in a special class with less than a dozen other kids, learning from a passionate and highly-qualified teacher. The curriculum was designed to encourage critical thinking, build problem solving skills, and make learning fun. It was a foundational part of my early childhood education. And I think it should have never happened.

Gifted education programs can be a great educational opportunity, but they can also have a significant negative psychological impact on children. There is a very simple problem with taking a select group of kids and telling them that they are better than all the others: They believe it.

As a child, I earnestly believed that I was smarter than most of my classmates, and therefore, better than them. As you can imagine, this made it kind of hard to make friends. I also struggled with self-worth issues, having been told for years that my academic ability was what made me special. These are commonly reported experiences among people who were labeled as ‘gifted kids,’ along with ‘gifted kid burnout,’ which results from gifted students being unable to keep up with the high expectations put on them as children.

Gifted education became widespread in the late 90s and early 2000s, so only in the last few years that ‘former gifted kids’ have been able to talk about their experiences from an adult perspective. Many have taken to social media to share their thoughts on gifted education and its many flaws.

However, the most common complaint I see raised by ‘former gifted kids’ on Twitter and Tiktok is not that they were singled out and given special treatment. It’s that they were not treated special enough. Many ‘former gifted kids’ argue that gifted education should be expanded to cover topics like burnout, work ethic, and time management. A phrase repeated frequently is “I wasn’t given the resources to succeed.”

If you are a ‘former gifted kid’ who earnestly believes this, I have great news for you. Nobody else was either!

The American education system can absolutely cause burnout, social isolation and self-esteem issues, but this isn’t unique to gifted children at all. Any student could develop these problems, regardless of how when they started reading at a college level.

Gifted kids are not uniquely harmed by the American education system. They aren’t even the primary victims of gifted education. If telling a child they’re special can have this bad of a negative impact on their self-esteem, it must be far worse for a child who’s told they aren’t. The people most harmed by gifted education are those who are excluded from it.

Gifted education is exclusionary by design. The Texas Education Agency defines gifted students as children with the potential to perform at “remarkably high level of accomplishment” in comparison to their peers. By definition, gifted children can only exist in relation to non-gifted children. It is not possible for all children to be gifted. Some must be inherently better than others.

Methods of ‘identifying’ these extra-special children vary, but most programs use some form of standardized testing, typically an IQ test. IQ testing was largely popularized by the American eugenics movement, so it shouldn’t come as a surprise that this leads to widespread discrimination. Especially in children under 10, IQ scores tend to correlate heavily with socio-economic status, which in turn, correlates to race. Children must also be recommended by a teacher. This allows for another level of racial bias, since public school teachers in the U.S. are disproportionately white compared to students.

The result is that on average, African-American, Hispanic, and Native American students are admitted to gifted education programs far less than their white peers. Whether intentionally or not, gifted education has become a form of de facto racial segregation. Rather than helping kids in need, these programs serve to maintain racial wealth disparities.

These programs represent a severe misallocation of resources towards children who are already more likely to succeed academically. Even putting discrimination aside, there’s no way to make gifted education truly equitable. The entire purpose of them is to uplift some children over others. The solution isn’t to make gifted programs more inclusive, but to get rid of them altogether.

Personally, I had a very positive experience with gifted education. My school used the most common form of gifted education for elementary schools, where children are occasionally pulled out of class for specialized enrichment. I got to have a personalized learning experience aimed at having fun, with a teacher who wasn’t busy trying to corral twenty other kids. However, an at-risk child with academic or behavioral issues likely could have benefited a lot more from being given the exact same opportunity. Instead, the school chose to devote more resources to me, a child who likely would have been fine either way.

Proponents of gifted education often argue that gifted students are at-risk students. Gifted students without support can become bored and disengaged with the curriculum, which can then lead to underachievement and misbehavior. However, supplementary gifted education doesn’t really solve this. I was definitely very bored throughout elementary school, and gifted classes were always the highlight of my week. But they didn’t make me less bored during the rest of the week. If anything, they made me even more frustrated, because I knew what I was missing.

I would also argue that being bored is not unique to gifted children. All of the kids in my class were bored. In fact, I imagine they were even more bored than I was. I wasn’t more deserving of a better education because I was bored for a different reason. If the problem is that elementary curriculum is dry and inflexible, the solution is to change the curriculum. It’s not gifted education in the U.S. that needs reform. It’s education as a whole.

The problem at the heart of ‘gifted education’ is that it assumes some children are inherently more deserving than others. Specialized education isn’t a bad thing, but it shouldn’t be reserved for a select few high-performing students. Every child deserves to be met at their level — not just ‘gifted kids.’