Nope, Not That Serious. 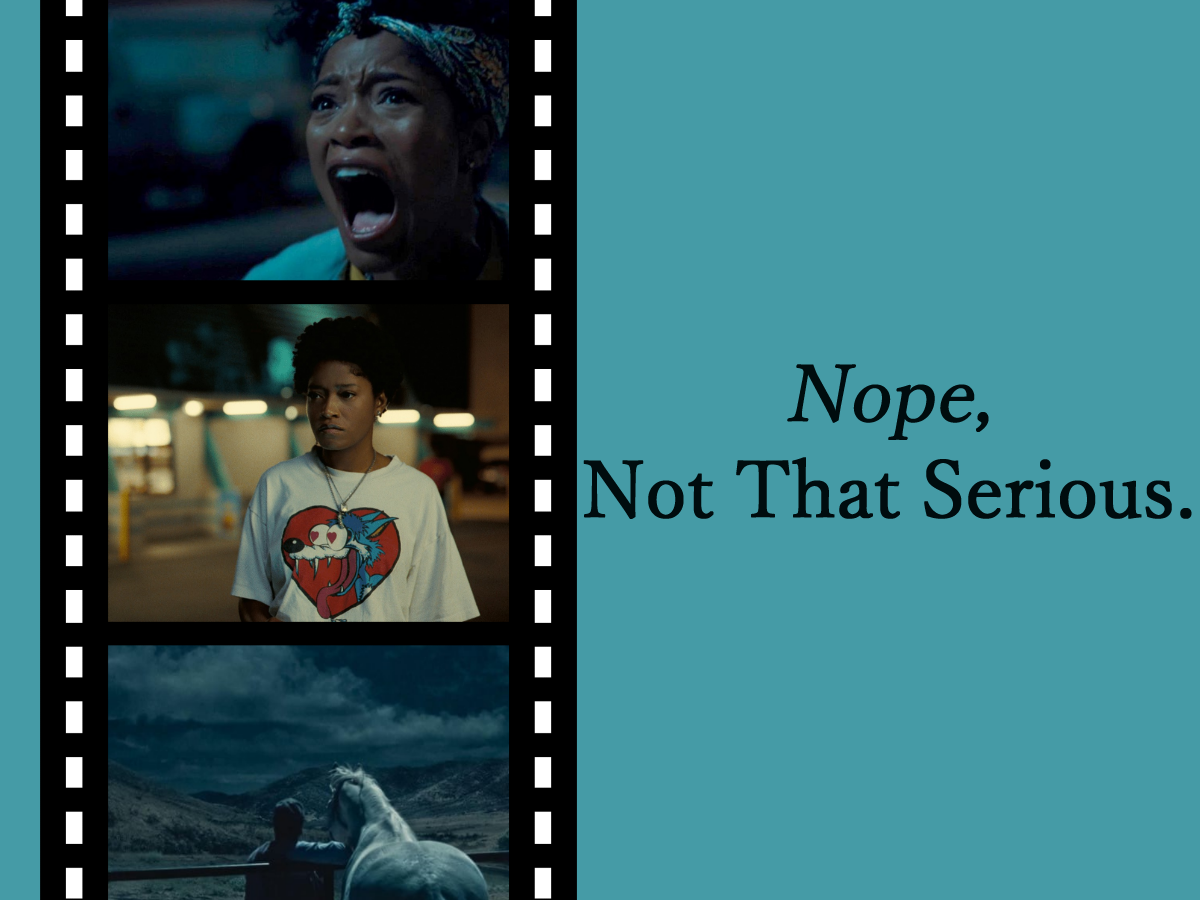 Jordan Peele has once again asserted his place in the film industry with his newest movie Nope. The film is a sci-fi horror starring Daniel Kaluuya and Keke Palmer as a brother and sister duo, O.J. and Emerald (Em for short). For those that haven’t seen the film yet, go watch it, but don’t worry there are no spoilers below!

Peele is an expert at creating hype around his horror films. He has built a cult following with each of his films, but Nope received reviews that were very different from his last two movies. Nope has not received negative feedback based on aspects of the movie like dialogue or acting, but rather on the “blandness” of the plot. Even though Get Out and Us had underlying narratives, why is it that Nope cannot simply be a fun thriller for the summer?

It is difficult for black creators to separate themselves from the stories of trauma that they  have experienced for generations due to their race. It comes to a point when black actors or writers cannot stray away from the topic without often being criticized for shifting their focus from racial issues to the everyday lives of black people (which is what is seen with Nope). Now, I’m not saying that everyone has to love the film and see it as a work of perfection; it has its flaws and people can even hate it if they want. But what’s frustrating are those who completely toss the movie to the side because it does not explore a deeper, tragic side of horror that revolves around societal problems.

Peele is not the first to be criticized for putting away race in film or television. Issa Rae is a pioneer of the 21st century in exploring the everyday lives of Black Americans rather than exploiting the trauma that comes with the role. Her show Insecure was thoroughly enjoyed by people of all backgrounds; they were excited to see Black people being just ordinary people (which is what we are). When interviewed by NPR, Rae said, “‘We don’t get to have a show about regular black people being basic.’” Similarly, Peele has not been allowed to have a “regular” horror film like other directors; according to many critics, he must stick to philosophical thrillers that cause his audience to think and re-evaluate parts of their lives like his previous pieces of work do.

Why is it that certain creators are expected to stay inside a box that others have forced them into? Many critics believe Peele fell short at attempting to cause a deeper discussion amongst his viewers, but maybe, just maybe, he didn’t want this movie to be seen through a philosophical lens. This phenomenon of holding artists to different expectations based on race, gender, sexuality, etc has prevented them from creating stories outside of their narrative, but Peele has made it clear that he will tell whatever stories he likes however he likes. Of course, history needs to be told, but not everything about black history is about racism and discrimination. Because there have been very few “trauma-free” black stories being told in film and television, people like me have grown up thinking that that is all we are worth: shock value.

Other aspects of the movie have been praised greatly. The cinematography was extraordinary; a majority of the scenes are set during the night, but were actually filmed during the day in order to expand what the audience could see in the dark. Bill Desowitz explains it best in an article for IndieWire: “So, van Hoytema built an elaborate rig for combining 65mm digital infrared information Panavision System 65mm film information, which was then layered together to create the special look.” This method is revolutionary for film, though it is still being worked to perfection.

The dialogue paired well with the aesthetics of the movie. Keke Palmer as Em was a suited mix of comedic relief and realism. I was most excited for her character; just from the first teaser trailer, everyone knew she was going to play a huge part in the film’s success. She plays opposite Daniel Kaluuya’s O.J., who is much more of a soft-spoken character and is connected to his family’s legacy in horse training. What I loved most about O.J. was how much he could express with so little dialogue at times. The eccentric energy of Emerald adds to the vitality of intense horror scenes while O.J. ‘s calmness contradicts that energy creating even more uneasiness for the audience.

People have gone on and on about the wonderful things that make this movie great, but for some people, it is still not enough to satisfy their expectations. Recently, Logan Paul took to Twitter to express his very negative opinions, calling Nope one of the worst movies he has seen. We all know Paul does not have an extensive background in the movie industry, but he sure as hell critiqued the movie like he does. He judged the plot extensively saying it was confusing and slow, especially for a Jordan Peele movie. But the problem is, like many other viewers, he was looking for something that Peele was actually avoiding in this movie. Peele wanted to focus on making a horror film with a cast he wished he had seen when he was growing up. He didn’t want that representation to be present because he was focusing on black horror, just black people in a horror film.

Whether people like the movie or not isn’t the issue; plenty of people don’t like the movie because it wasn’t as much of a thriller as they hoped for, or maybe they didn’t like the comedic moments, but what is the issue is the limitations that are still placed on black creators like Peele. Nope does not need to fill the stereotypes placed upon the black cast and crew in order for it to be a great horror film; Peele is too experienced as a director and producer to be told what he can and cannot create.