DJ Showcase: Behind the Screens

DJ Showcase: Behind the Screens 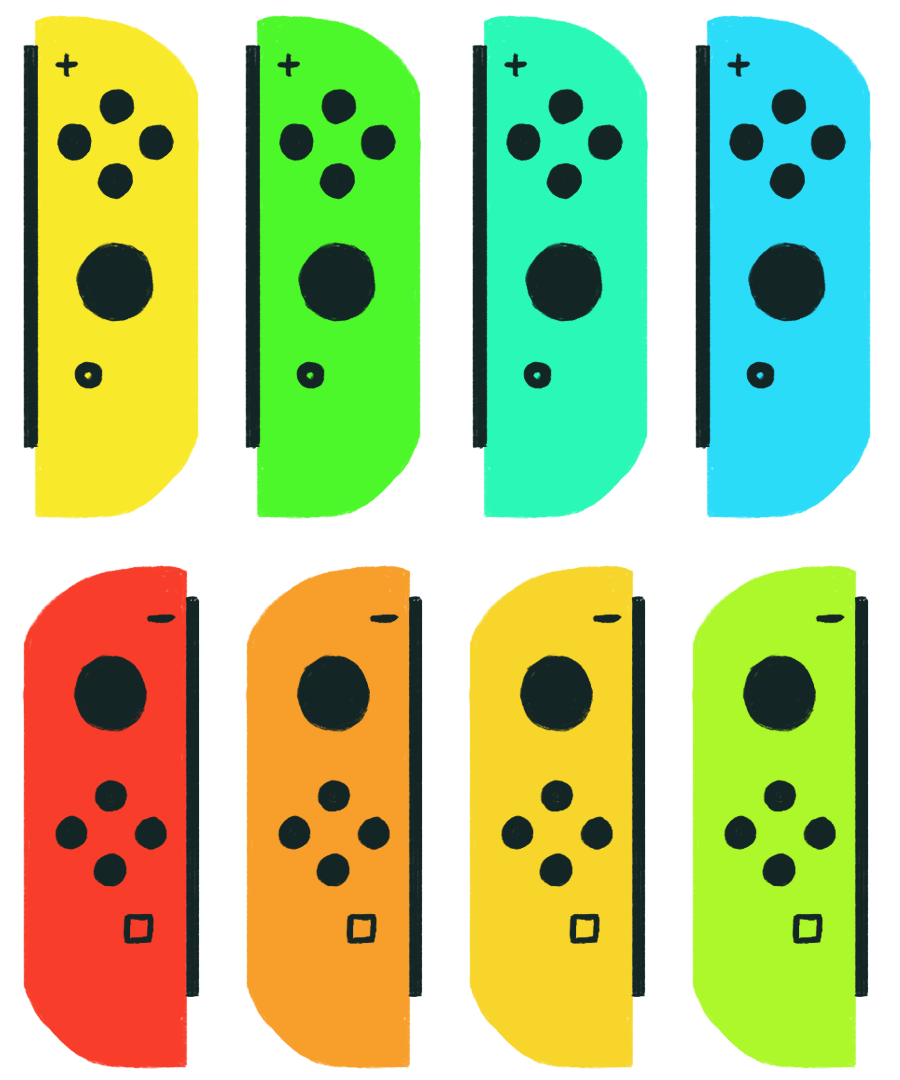 How would you describe your show Behind the Screens to someone who’s never listened?

Hector: I think the best way to describe it is basically any sort of gaming news that’s relevant in this age, and whatever console that you play on, we like to cover a ton of topics about esports and video games in general. And then we just love to kind of have a ton of banter with each other. So if maybe I don’t agree with Tim about something, then we’ll argue with him on the show —

Hector: So it’s kind of like, the first half of it we like to cover a lot of news and then the latter half of it we kind of go more into generalized discussion, kinda chill with each other —

Adi: Our show has good vibes.

Tim: Yeah, I think a lot of the scope of our show is just anything that is in the peripheral of gaming. Like, it doesn’t have to be anything specific, it’s just about everything.

How do you decide what topics to cover?

Adi: We’ll usually check what’s recent or anything major. Most recently, there was an Animal Crossing Direct, which is one of their major franchises. So there’ll be discussion about that, like, “Would you like to see this thing added in?” or “What are your thoughts on this?”

Tim: And I think what’s interesting about what we bring to the table is, although our news is usually very up to date, and of that week, we also try to tie it in to overarching concepts — so you can listen back to one of our older shows and remember what we’re talking about and that we’re adding to it, so it’s not just news, news, news, news.

How much of the show would you say is planned versus how much is improvised?

Hector: Yeah, about 60/40. So for instance with this last show that we did, we have this one series on our show called “Deal of the Week,” which is basically any sort of gaming-related deals. [This week] ours was Assassin’s Creed, and so then we talk about Assassin’s Creed, and then video game movies in general. So kind of just merging topics.

Adi: We operate more like, we have certain things to talk about, but we don’t necessarily have to hit every one.

What are some of your favorite topics to cover?

Adi: For some reason we’ve had this odd obsession with talking about Google Stadia, which is a cloud-based streaming service that’s coming up and did not deliver on everything that they promised. It’s been a recurring thing on the show for no reason, like none of us have any personal investment in the Stadia, we just talk about it all the time for some reason.

Hector: It’s because every single time we’re looking up news articles, there’s always something related to that, so we’re like, “Maybe we should talk about it this show.” So probably every other week we’ll end up talking about some sort of new online streaming service. All of us are always bashing on them, but we’ve never cared too much about it so it’s a fun topic. As far as my favorite, I think it’s not a specific topic but whenever we get into fun arguments with each other, and we’re disagreeing, I think it’s the most enjoyable to do and also to listen back at.

Tim: Bouncing off of that, I think that all of us play very similar games, so like, we’re all Nintendo boys, we can talk about Nintendo all day, but we also all play, like, Rainbow Six Siege, or Apex Legends — all these other games that we play not necessarily together but in general we all play similar games. And then we also talk about our background, because when we were kids, we all played different things.

How did the four of you decide to put together a show collaboratively?

Adi: Fun story, so this one starts with me because I had the idea for the show about a year ago-ish, and it’s just kinda something that sat around in my head. And at this point, trainees for that semester had already started so I thought about it, forgot about it, and then it wasn’t until I discussed it with Hector a semester or two later that we thought, “Oh, we should actually go do this,” it seemed like something fun. And we were just like, “Who do we banter well with?” and our good friend Hitarth, who we play video games with all the time, we figured we could talk with him. And then one time when we were all sitting on a call discussing what we want the show to be, what we would want to talk about —

Tim: They met me.

Adi: Yeah, Tim was also like, “Why don’t you talk about these things?” which were things we hadn’t really considered. We didn’t really have that perspective, so we got him in on it too.

Hector: Adi, Hitarth, and I have been friends for awhile now, and Tim was relatively new to our friend group, but we still knew him, so it wasn’t like a “we randomly met him” kind of thing.

What would you list as part of your personal or overall Behind the Screens canon that you think all of your listeners should play?

Hector: For me personally, I’d say probably the newest Luigi’s Mansion on the Switch, Luigi’s Mansion 3. Ever since I was younger, I used to sit by the TV watching my older sister playing the game, and it was always a really scary game for me. I would have, like, nightmares about it — for the first original one on the GameCube. But it was probably one of the two games — Luigi’s Mansion and Mario Sunshine — that really got me into gaming. And so I can always love the franchise for what it is. With this third one coming out recently, I think it’s a fantastic game, so for those of you who haven’t played it on the Switch, I would definitely recommend it.

Adi: I guess I’ll go next, and I hope you’re prepared to hear some sighs and gasps from these three over here because I won’t shut up about the game that I’ll say. It’s a 3D indie platformer known as A Hat in Time. I guess my alternate would be Super Mario Galaxy, which is also another 3D platformer. But [A Hat in Time] is such a charming little game, you’re a kid going back and getting hourglasses in wacky environments. I just really enjoy the 3D platformer genre and A Hat in Time is just super charming to me.

Tim: I’ll say Melée. So, I’ve been playing Smash Bros. Melée, it’s the second title of the Smash Bros. series, I’ve been playing for a long time. What I like about it is the competitive scene. We talk about esports on the show a lot and I think that’s something that is so cool to me about Melée specifically, that it’s so grassroots. In 2001, basically when it was released, everyone kind of played it with their friends, but then people started getting serious about it and making it, like, “this person is the best in my city, let’s see if we can do a tournament.” Then in 2005 or so the east coast and west coast had this kind of banter and that’s when [the internet] started having Smash boards, they were talking back and forth — it was one of those things where, I wasn’t playing a lot back then, I started playing when I was in high school. But understanding the very rich history of the game when it was so grassroots, very “Mom and Pop’s basement,” people were going in and starting money matches or playing CRTs, people would travel across the world to basically say, “I’m better than you, and let me show it.” It’s so cool to see that, and then today the scene is still growing, and it’s still a game where there’s always stuff to do. Because you can never be perfect, and people want to be “the perfect player” or whatever, and it’s something that’s super fun to watch progress throughout the years.

Hitarth: Can I break the trend and do two? One’s an old one and one’s a new one. For the nostalgic factor, and the game that I loved as a child and still play now: Sonic Adventure 2 Battle. One of my personal favorite games, I remember playing it when I was young, I’ve had nightmares about one of the bosses — the King Boo one —

Hector: I feel like we’ve both had King Boo nightmares.

Hitarth: We have! That boss is scary, its tongue’s like multi-colored and everything!

Hector: That’s how we relate, you know. We were both peeing the bed when we were younger about these games.

Adi: I don’t know if that’s something you want on record.

Hector: Well, now it is.

Hitarth: And so that game just has, if you play it now, it’s… so bad, but I love it for the nostalgic factor. It’s a Sonic game, it’s a great speed game and a casual game, just pick up, play. Because of the variety of the levels, whether it be an action stage where you go through the level as fast as you can and have a good time, you can play as Sonic, Shadow, Rouge, Tails, Eggman, you name it, you have both sides for everything. One level you’re playing as Sonic, going down the road getting chased by a giant monster truck, and the next, there you are, hunting for pieces of the master emerald — you’re in a mech pilot, going around shooting enemies and then you have car racing in the middle of it all of a sudden — and then there’s the Chao Garden aspect, which is the casual side, where you can raise Chaos and do different, like, karate, races, and a bunch of other stuff.

Tim: Speaking to that — and I know you don’t care about this at all — me and my old roommate played Sonic Adventure 2 and speedran it, but we also did the Chao Garden and spent so many hours trying to race the perfect Chao. They have different stats like strength, swimming, flying, speed, and they each —

Adi: For reference, this is what it’s like talking to them all the time.

Hitarth: Yeah, you can spend hours on that. And then one that I play so much more now that makes me want to end it all so many times is Binding of Isaac — just the series, from the original game all the way up to the new games and expansions. It’s a rogue-like production game where you have different floors and you progress through, and there’s a boss at the end of each floor, which you have to beat to progress to the next floor, and there’s a multitude of items, and I’ve played the game so much. I love it. And it makes me want to end it all.

Any last words for our readers about the show?

Hector: I think if you were to ultimately wrap up why I think our show is a lot different from other shows, it just really comes down to the fact that even after we get done with our show, like, we’re about to all go get lunch together. We’re all really close as friends, so I feel like we have a kind of normalized bond when we’re on the show.