Texas: A State of Incompetence

Texas: A State of Incompetence 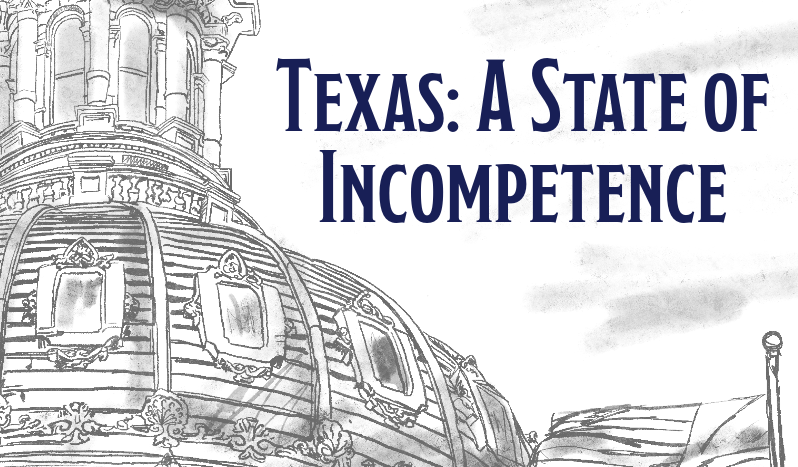 Have you ever looked at the Texan state government, and wondered, what in tarnation is that? Well luckily for you, I’ve put about 2 minutes of research into the topic by reading blogs on the internet, and can thus explain every single aspect to you, thanks to my legitimate research into the history and intricacies of the Texan government. I won’t link my sources, but that’s fine because unlike any other random person on the internet with “basic civics knowledge” and who “literally work for the government,” you can trust me!

A long, long time ago, the great Texans of this land joined up with the rest of the Confederate South in order to make their own great union of states, with a strong moral compass and economic superiority. However, even though Texas was fully capable of winning the war by themselves, they were weighed down by the rest of the piss-randoms in the Confederacy. And thus, though we won the last battle of the Civil War, we ended up in shameful surrender.

Shortly afterwards, the North came in and installed a terrible dictatorship. The governor had full power and was able to declare martial law, which led to the corruption of water, the pollution of churches, and the burning down of women and children. Thankfully, God blessed this great state with the end of Reconstruction, which ended the dictatorship. Afterwards, the multitudes of diverse Texan groups, namely farmers, rich white men, priests, and politicians, came together to create the greatest and most inefficient government known to man.

As the great Mames Jadison once said, “Ambition must be made to counteract Ambition.”

Our great Texan forefathers learned from the creators of the United States that the government should be split into as many little pieces as possible so that it would not function properly, and thus there could be no abuse of power. The terrible post-Civics War dictatorship could never occur again, and the future of Texas would be secured forever.

So how did they do this? Well, they took a template of the United States government, but then endeavored to make each branch of government infinitely worse and incapable of achieving anything that resembled the act of governance.

First, they split the governor’s office into 14 separate, elected positions. Each of the offices contained an equally important but separate power, including being the ceremonial head of the legislative, signing bills, managing land, giving out the budget by seemingly random lottery, ritual sacrifice, and managing the state’s natural resources (separately from managing land) and more. Because they can’t all fit in their Austin office building, they participate in challenges and vote somebody out of the office every week Survivor-style, as determined by Davy Crockett back in 1845. Because of the consistent disruption, they are able to nearly never actually accomplish anything worthwhile.

Finally, the judicial branch. Because the United States judicial branch was already so inefficient and biased towards the important players in the Texan population, it was kept largely the same as it was before. While there were a few different tweaks and variations here and there, ultimately it’s the same court system that you know and hate to deal with today. Fun fact, the county system was implemented across the state so that there would be more county courts, complicating the court system further. The actual county “governments” are non-functional by design.

In addition, it’s said that a secret council of the founding members of the new government, consisting of a priest, a farmer, the dumbest rich person (determined by battle royale), an anarcho-capitalist, and a master gun maker do their best to create chaos in government and prevent orderly function. However, they were found out by the pesky “federal government” shortly after the 1960s, and the effects of its dissolution are clear.
Unfortunately, the courts began to be populated by “qualified judges” and “lawyers. The legislature lost its diversity, as random business owners and high school graduates lost their rigged elections. The governor’s office became infested with elected officials of the same party, leading to *shudders* actions being taken towards governing the state. This is not the dysfunctional, idiotic, and wholly unimportant government that was supposed to be. So, I urge the reader to join me in voting in a variety of different competing governmental officials in this next election cycle, so that the government can return to the incompetent, incapable form that our forefathers planned from the very start.