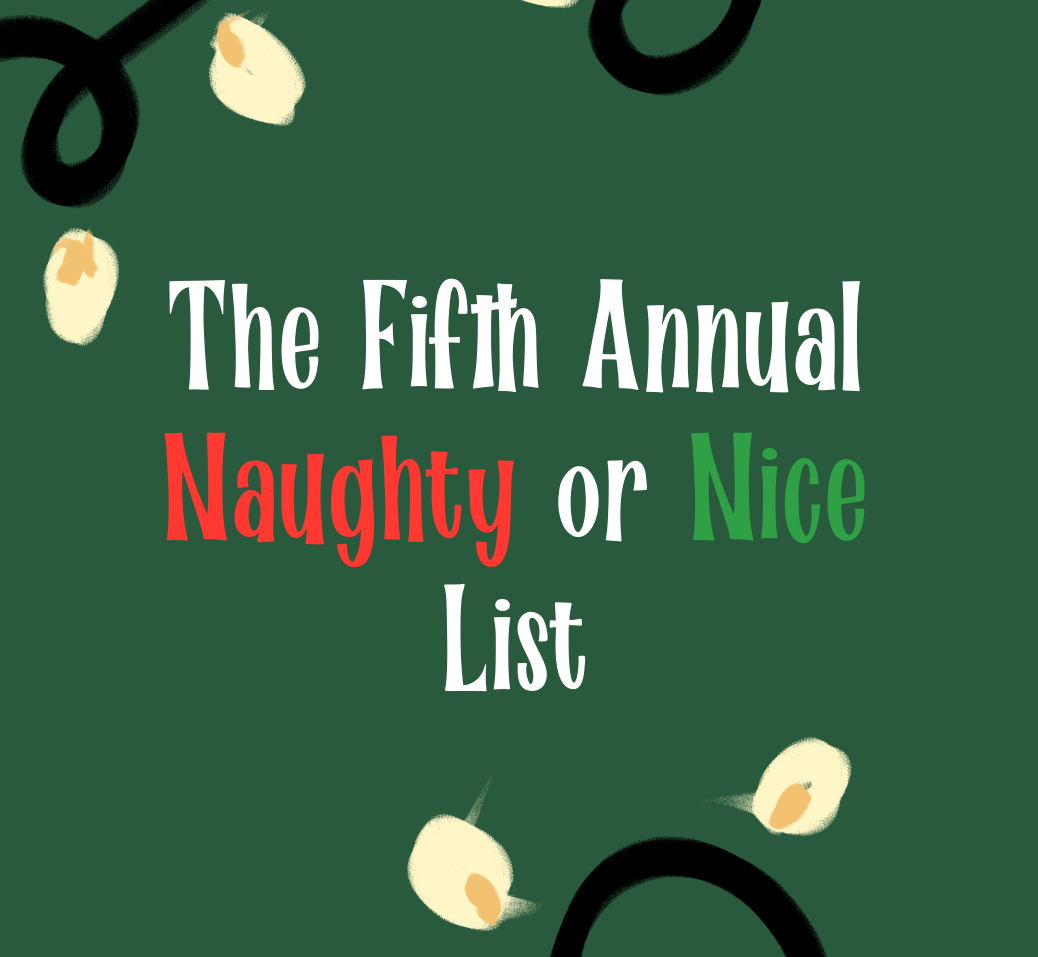 Mamma mia, here we go again… And I thought it’d been a while since Mitski released new music! After 40 long years, everyone’s favorite Swedish pop group is back and more ABBA than ever. Their new album, Voyage, sounds a lot like it was released in 1983, but with better sound quality— which is exactly what fans wanted!

After nearly 15 years of desperately trying to convince ECS students to attend intern fairs, Jerry Alexander has finally called it quits. We’re going to miss his daily emails on upcoming workshops, conferences, and job opportunities, but AMP and all 26,000 of his LinkedIn connections are wishing him a long and happy retirement!

It takes some guts to go to war with a company that knows literally all of your personal information, so we tip our hats to Frances Haugen. Haugen is the whistleblower of the Facebook Papers, a series of internal documents essentially proving that Facebook, Inc. (sorry, “Meta Platforms”) is 100% conscientious of every terrible thing it causes. From Facebook fake news to Instagram eating disorders to WhatsApp riots— they know all about it, they just don’t care! Needless to say, Facebook is not on our nice list.

The one-man development team of Stardew Valley was already on our nice list for releasing the game’s biggest update yet during the peak of quarantine, and for making it free even though there was more than enough new content to sell it as a DLC. But now, he’s also got a brand new game in the works! Haunted Chocolatier looks like it encompasses everything fans love about Stardew, and we can’t wait to see how it turns out.

For decades, a curse has plagued Disney Channel’s most prominent child actresses. From Hilary Duff to Zendaya, Selena Gomez to Bridgit Mendler, dark magic has forced each of these artists to keep their music “family friendly.” Only through great trials and tribulations can one free themself from these evil forces, as Miley Cyrus did with a wrecking ball in the early 2010s. But finally, by deftly dodging the record deal Disney usually packages with its teen acting contracts, it seems that Olivia Rodrigo has broken the curse for good.

Rodrigo’s debut album Sour is anything but family friendly— and that’s exactly what makes it so good. The album feels unabashedly teenager-y in a way that so little pop music genuinely does, and it definitely helps that Rodrigo’s actually allowed to curse. In just eleven songs, Sour manages to contain the raw concentrated energy of every post-first-breakup notes app poem ever written. And she’s still got her Disney+ show too!

AMP didn’t put out a Naughty or Nice list last year, so we didn’t get the chance to thank our essential workers like everyone else! So we’re taking the time to do it now. If you’re a grocery store clerk, fast-food line cook, hospital janitor, or anyone else who had to work through the entire pandemic, consider yourself acknowledged! Of course, this acknowledgement means nothing and we have no monetary compensation to offer you.

We’re grateful for the workers who continue to slog through the ongoing pandemic, but let’s not forget about all the people not working! Striking is finally back in style again, and we at AMP are thrilled about it. Between the Nabisco and Frito-Lay strikes this year, snack food employees are leading the charge for improved working conditions and benefits. Personally, I think that anyone involved in the production of Double Stuf Oreos should be making AT LEAST more than computer programmers do right out of undergrad. If only Nabisco agreed.

And to everyone not formally striking, but just unwilling to sell their soul for eight dollars an hour, a big shout out to you too! By simply refusing to put yourself through the living hell that is night shift McDonald’s drive-through, you’re contributing to the so-called low wage “labor shortage”, a nation-wide phenomenon that is finally forcing Starbucks to give out some meager pay raises. Hey, in a few years, they might even start paying a living wage! So keep it up, everyone who’s not working, and maybe soon the businesses will realize that if you treat your employees decently, people will actually want to work for you.

This year, we’re finally giving Elon a break to dunk on some other obscenely rich people. In a video announcement of very similar quality to a computer science major’s first presentation in an intro-level communications course, Zuckerberg announced that Facebook, Inc. was rebranding as Meta Platforms. The company claimed this was because they wanted to focus on “the metaverse” (VR real estate, basically), but suspiciously, rumors about the name change didn’t start until the same week Haugen’s lawyers released the complete Facebook Papers. Trying to hide something, Mark?

If the name change really was to get people talking about that instead of the document leak, it worked! But maybe not for the reasons “Meta” intended. Everything about the video announcement was cringeworthy enough to make fun of, especially Mark himself. Really, what’s the point in having a 122 billion dollar net worth if you can’t even hire someone to do your eyebrows?

Ignoring the whole global pandemic thing, the year when the MCU didn’t release any new content was the happiest year of my life. More of that, please. I’m sick of Disney and this one specific franchise making up 90% of the cultural zeitgeist. The movies aren’t even good! They’re not good action or superhero movies! If you want to see a white man blow stuff up that badly, go watch Mad Max: Fury Road or X-Men: First Class. Just please watch literally any other movies so that instead of Disney inevitably rebooting the timeline in ten years and creating an endless cycle of mediocre action films, this series can finally come to an end.

And don’t think I haven’t noticed you quietly setting up the Young Avengers, Disney. After what you did to Matt Fraction’s Hawkeye? Go make another Star Wars trilogy or something, and stop messing with comics that I like!

Megan, Megan, Megan… how can one celebrity rise so high, then fall so hard? First people love you because you’re hot, then people hate you because of internalized misogyny, then people love you again in hindsight, and now! Now you’ve thrown it all away for a man who looks like he couldn’t explain the difference between a comb and a hairbrush. And after all that the cult following of Jennifer’s Body has done for you. We had a lot of sympathy for Fox after it came out that her acting career tanked because she had the audacity to complain about working conditions on the set of Transformers, but unfortunately, she’s now joined Grimes in the ranks of white women who chose the wrong hill (man) to die on. Come on, at least Elon was a billionaire.

One Starbucks employee who isn’t getting a raise this year is CEO Kevin Johnson, whose proposed $50 million dollar raise and $1.86 million dollar bonus were voted down by shareholders in March. This rarely happens at large corporations, so for shareholders to be rejecting Johnson’s pay bumps, they must really, really not like him. That’s something they have in common with many Starbucks workers, despite Johnson’s claims that “[employee] energy and spirit is high” and that the labor shortage isn’t affecting them. But as anyone who’s spoken to a Starbucks barista in the last year knows, most locations are severely understaffed, and the company has been less than understanding about it. Have some patience next time you’re waiting on a mobile order or in a Starbucks drive-through, because corporate certainly doesn’t!

It’s been a rough year for everyone. First with online classes, then with de-densified classes, then with all in-person classes during a pandemic, we all have whiplash from the many teaching formats and learning platforms we’ve had to figure out in the last 12 months. So Comets really could have used someone in our corner during these difficult, unprecedented times. Perhaps a beloved unofficial mascot, watching over us from above and presiding over our return to campus. But when the world needed him most… he vanished.

Enarc, our lord and savior, has abandoned us. Do freshmen and sophomores even know who Enarc is? How do they make it to their 8AM calculus lectures without being comforted by the glorious sight of Enarc as he lifts the sun? Who do they look up to for guidance in the midst of midterm exam madness? Yes, there are no longer large amounts of construction obstructing campus traffic, but at what cost? Oh Enarc, why hast thou forsaken us in our hour of need?

And the most naughty of all… Governor Greg Abbott!

For the first time ever, AMP is awarding a special, extra-naughty spot on Santa’s list. It just didn’t feel right to lump this one in with the rest of the bad kids. As all long term Texas residents know, Gregory is a special kind of evil, one who doesn’t even deserve coal for Christmas. That would be too merciful, because coal has actual uses.

For example, coal can keep you warm during a winter storm blackout because the Texas government refused to winterize the power grid or connect it to the national power grid. You can use coal for barbecues at your maskless, unvaccinated company picnics because the governor made it illegal for cities, counties, or any organization that receives state funding to require masks or COVID-19 vaccination. Being able to stay warm and cook food is especially useful if you live in one of the Austin homeless camps Greg Abbott wants to ban, as if people without homes are supposed to go anywhere else.

We can’t get into every awful thing our governor has done this year, or even just this month. From the abortion ban to the ongoing humanitarian crisis at the border, there’s just too much evil to unpack in one humble article. But we can certainly sum up our feelings about him in one simple statement: