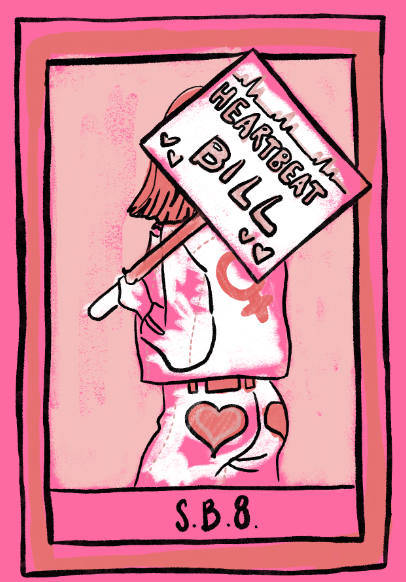 On September 1, 2021, the Texas Heartbeat Bill became state law effectively banning abortions from the time fetal cardiac activity is detected, usually around 6 weeks gestation. There’s also no exception for rape or incest.  Surprisingly, effectively banning 50% of the population from accessing basic healthcare was met with a litany of lawsuits; except there was one problem: healthcare providers and patients had no one to sue. Previously, healthcare providers have sued the state or specific government agencies meant to enforce similar heartbeat bills passed by other states. Only two lawsuits have successfully made their way to the Supreme Court: Whole Woman’s Health v. Jackson and United States v. Texas. SB 8 has, thus far, been able to circumvent most lawsuits and therefore federal scrutiny because it is not enforced by the government, but by private citizens. If a US citizen can prove that an abortion was performed in Texas after a fetal cardiac activity was detected they can sue the abortion provider and anyone who aided and abetted that provider for $10,000 in a personal injury lawsuit. Though I am unsure of what the personal injury would be, I hypothesize that it’s likely a broken nose from sticking it into other people’s business. In simpler terms, the champion of limited government, Governor Greg Abbott deputized the majority of Texas citizens to hunt healthcare providers for sport.

On November 1, 2021, the Supreme Court heard oral arguments in both cases, and I watched the proceedings so you don’t have to. In brief, SB 8 sets a legal precedent where states can overturn any federal constitutional right as long as citizens are the ones enforcing the law unless Congress passes a bill explicitly stating that all citizens are allowed to have that right. For example, if a state were to ban AR-15 style rifles, the law could not be challenged federally unless Congress passed a bill allowing the possession of AR-15 style rifles. Unrelatedly, a few days prior to the oral arguments a gun-rights group filed an amicus brief (fluffed-up legal jargon for a letter) urging the Supreme Court to overturn SB 8 likely due to their strong stances on equitable access to reproductive healthcare and women’s rights. Despite declining to block the enactment of SB 8 in a 5-4 vote at the end of August, seven members of the court appeared skeptical of Texas’s case during the November hearing. Notably, Justices Barrett and Kavanaugh who initially declined to block the law seemed to suddenly realize that a law effectively stripping the court of a lot of its power was not good for business. Justices Thomas and Gorsuch appeared to favor Texas, likely considering the usurpation of federal powers is an easy way to get out of doing more work.

Of course, I could focus on the existential threat this type of law places on members of the LGBTQ+, racial and ethnic minorities, religious minorities, the disabled community, drug users, sex workers, and those subjected to extreme poverty and houselessness… But where is the fun in dwelling on very possible realities many, including myself, could be facing soon? Instead, I think we should lean into it and as such I have some proposals for other citizen-enforced $10,000 bounties:

This is an overall win for public health and an excellent opportunity to fully realize their dreams of being “oppressed”. Of course, even now unvaccinated individuals are treating their inability to eat at Applebee’s like their own personal holocaust.

Since Congress is never going to tax the rich, we need to take matters into our own hands and redistribute the wealth ourselves. Elon Musk’s inevitable and very public meltdown on Twitter is an added bonus.

This includes but is not limited to: tipping poorly, asking if a worker can look in the back, insisting a store take expired coupons, sending food back repeatedly, placing large orders in the drive-thru, filming workers doing their jobs, and refusing to comply with company mask policy.

I do a little feel bad for this one seeing as so many of these people have already been scammed into believing they own a JPEG rather than an imaginary certificate or that dogecoin has any real value; then I remember that crypto and token mining are killing the planet. This is the only method of profiting from crypto where you don’t have to burn down a section of the Amazon rainforest.

For years televangelists have promised their supporters prosperity if they simply prayed hard enough. This is the fastest way to answer their prayers.

There’s enjoying things and then there’s making an entire multi-billion-dollar corporation your only personality trait. Prior to the pandemic, I thought this was just a cringe subculture, but after witnessing adult temper tantrums over a theme park temporarily closing in response to the uncontrolled spread of a deadly virus my mind has changed.

At least I am writing my own list, rather than curating screenshots from Reddit threads and the “Top 10 tweets you missed this week”.

I am sure that these couples share a Facebook account because they love each other so much and not because someone cheated. It is easiest to find them causing drama on some neighborhood or community page because there is a “suspicious” 12-year-old riding their bike up and down the street, promoting a pyramid scheme, or posting fringe covid conspiracy theories onto your timeline.

Adults that introduce themselves as their Hogwarts house

Please read another book there are so many good ones out there. I may be cynical, but categorizing your entire identity into courage, intelligence, ambition, or Hufflepuff seems a little reductive.

I don’t know why they think we need to know how many children they have- we can all infer that it’s more than three considering no one’s first choice of car is a Honda Odyssey. As an alternative to the $10,000 reward, the plaintiff can have one of the children or family pets from the bumper sticker. An extra $1,000 is awarded if the bumper sticker has everyone’s name.

He named Bella’s daughter after the Loch Ness monster and people are still defending him? Edward was obviously the superior choice between the two.