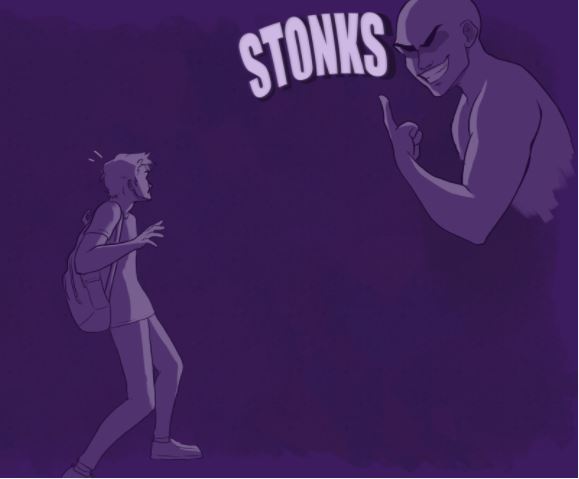 “Welcome to JSOM! We are happy you are here,” the sign read. Freshman marketing major Kevin Nguyen, who was currently very lost, did not return the sentiment. Business hadn’t exactly been his first choice course of study. Marketing is still a creative field, he had thought. It’ll be fine!

It was not fine. It was the first day of classes, and Kevin was already fifteen minutes late for BA 1310: Making Choices in a Free Market System. The hallway that should have led to his classroom ended in a dead-end, and he was now pacing the building frantically. He had passed the “Welcome to JSOM!” sign three times now. “Lost?” The fine print taunted him. “Scan this QR code or download the free MyJSOM app!” He’d tried the QR code. It didn’t work. He’d tried downloading the app too, but the map button just led to a broken webpage.

“Excuse me,” Kevin said to a woman wearing a gray suit and a vacant smile, “do you know where room 210 is?”

“Hi, I’m Jessica,” she responded, which didn’t help at all. “I’m working on my master’s in finance. Do you want to connect with me on LinkedIn?”

Kevin tried telling her he was actually in a rush, but Jessica looked him in the eye and asked again, meaningfully, “Do you want to connect with me on LinkedIn?”

Five minutes later Kevin still had not found room 210, but he was now the proud owner of his very own LinkedIn account. His profile picture was the only photo he had of himself in a suit: a cheesy vampire getup from a Halloween party, complete with glow-in-the-dark plastic fangs. Jessica had snorted at it, and for a moment her smile seemed almost real. After he accepted Jessica’s connection request, she pointed him towards the stairs.

Kevin was pretty sure his class was supposed to be on the first floor, but he was now 20 minutes late and getting desperate. He then proceeded to get even more lost, missing his class and forgetting how to get back to the stairwell. Exhausted, he sat down on one of the hallway’s many cushioned benches to catch his breath.

When Kevin woke, he wasn’t sure how much time had passed. Hearing footsteps, Kevin looked up to see an older man in a three-piece suit aggressively power walking past him. He called out to ask for directions, but the man didn’t seem to hear. Kevin scrambled after him as he walked into an open classroom.

“Welcome to Business in a Global World,” the older man said from the front of the room. Kevin, realizing this was his next class, hesitantly sat down. “Your first assignment is to add me on LinkedIn.”

After class, Kevin attempted to find his way out of the building. He tried following the other students, but he always lost sight of them before they reached the stairs. Soon the halls were void, and Kevin was alone again. He resigned himself to spending the night in the building. It wasn’t so bad. The fluorescent lights didn’t dim, but the benches were about as comfortable as the dorm beds. He would deal with his hunger in the morning.

The next morning Kevin tried asking the first person he saw for help. Once again, they didn’t seem to hear him. Kevin followed them into a packed lecture hall and took a seat next to them. He didn’t actually remember registering for this class, but his name was on the roll call, so he went with it. At the end of his second day, Kevin couldn’t remember when he’d last eaten. But he had four new LinkedIn connections, and that filled him with a different energy.

Life continued on like this. Kevin would wake up, follow someone until they entered a classroom, and then attend that class. His name was always on the roll, and his completed assignments were always in his backpack. He didn’t feel the need to eat or drink, but Kevin hadn’t been impressed by the dining hall, so he took this as a good thing. Before he knew it, a year and a half had passed without Kevin leaving the second floor of JSOM.

On the last day of the year, while the university was closed for winter break, sophomore marketing major Kevin Nguyen was muttering to himself about “data visualization” and “stock options” when he finally happened upon the elevator. Kevin stood and gaped at the steel doors for a short eternity. He’d spent months dreaming of this moment. He’d given up hope.

Then there was a small ding, and the elevator doors opened to reveal a tall man in a crisp, white collared shirt and blue checkered tie. Instead of getting out, he looked Kevin right in the eye and smiled, vacantly.

“Working hard or hardly working?” he said, and laughed at his own joke. It was as good an invitation as any. Kevin rushed into the elevator.

“Kevin, right?” the tall man greeted him. “We met at the intern fair. I’m Dave. Remind me what your major is again?” Still in a daze, Kevin gave his practiced spiel about how he was a sophomore marketing major interested in learning SQL and Salesforce. He did not remember meeting Dave (or attending the intern fair, for that matter). Kevin also didn’t actually know what SQL or Salesforce were, but Dave nodded approvingly.

“We have a Salesforce internship open. You should apply.” The doors opened again, and Dave stepped out. Kevin followed. After a moment, Kevin realized he was on the wrong floor — but when he turned around, the elevator was gone, and so was Dave.

There were no benches on the third floor. He still didn’t know what Salesforce was, but he filled out the intern application anyway before curling up on the cold tile. When Kevin woke, he was wearing a gray business suit, with a crisp white shirt. His LinkedIn had already been updated with his new intern position, and his profile picture had been updated from his goofy vampire costume to a professional headshot.

Kevin never found a good place to sleep, but it was alright because he no longer needed to. With an extra eight hours a day, his productivity increased dramatically. He wandered into more classes and submitted more assignments, although he was never completely sure they were the right ones. Time passed.

One day, junior marketing major Kevin Nguyen received an email telling him he needed to meet with an advisor on the fourth floor. He was trying to decide if it was worth the embarrassment of admitting he still couldn’t find the stairs when someone cleared their throat behind him. A woman in a pencil skirt and tortoiseshell cat-eye glasses raised a pointed eyebrow at him before walking past. Kevin, as always, followed. She led him up a flight of stairs and into an office, where they both sat.

“Kevin Nguyen, marketing major with a minor in business administration?” the advisor asked, although she clearly knew. He hadn’t known about the minor, but he nodded. Kevin squirmed as she went through his degree plan, zoning in and out as she told him he was actually on track to graduate a year early, thanks to all the summer classes he’d been taking. Finally, unable to stop himself, he blurted out the question that had been nagging at him.

“Did I fail BA 1310?” From behind her cateye glasses, the advisor gave him another pointed eyebrow raise.

“You know you can access your grades through Galaxy, right?” The advisor clucked disapprovingly and checked her screen. “Making Choices in a Free Market System? I don’t see it on your transcript. But your AP Econ credit fills the requirement, so you don’t need it anyway.”

Kevin sat back, the tension melting out of his shoulders. All this time he’d been worrying over Making Choices, and he hadn’t needed it anyway. What a relief, he thought. Then, what a waste.

“You know,” the advisor said, looking up at him, “if you’re interested in graduate school, you qualify for the Fast-Track program.”

After leaving the office, Kevin found himself facing the stairwell the advisor had just led him up. Kevin blinked, expecting it to be gone when he opened his eyes again, but the stairs miraculously remained. He took a deep breath, and for the first time, descended.

The next August, Kevin was walking on the first floor of JSOM in his freshly-pressed gray suit when he was stopped by a nervous freshman. The freshman asked him if he knew where room 211 was. Kevin Nguyen, B.S. in Marketing (with a minor in business administration), smiled and held out his hand.

“Hi, I’m Kevin. I’m working on my master’s in business administration. Do you want to connect with me on LinkedIn?”