A Typical Student Government Debate (How would you know otherwise?)

A Typical Student Government Debate (How would you know otherwise?) 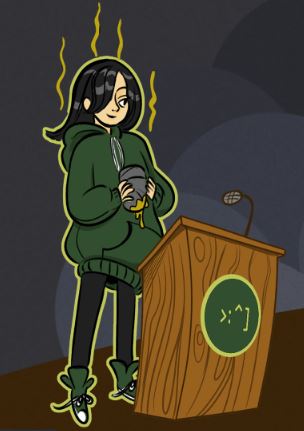 The following is a full transcription of the UTD Student Government debate which took place on March 28th, 2022, at 6PM in the SSA Auditorium. No edits have been made for clarity.

Moderator: What up broskis, welcome to the student government debate! My name’s Tyler Bro-hardt, and I’m nominally moderating the debate today! We’re gonna have three parts: a part where I ask stupid questions, a fistfight, and then a cross-examination.

Seb: Increasing the Taco Bell hours to 2AM.

Fatimah: We’ll make sure to use absolutely none of the budget SG is allocated from student fees. We don’t need to spend money to improve student life lol. We are gonna do nothing and destroy stuff. And we will not spend money on equipment to destroy stuff — such as the Taco Bell — because we want to do it as ineffeciently as possible. Every Student Government meeting will consist of senators reading their favorite Nietzsche verse. The same one. Every. Time. And they will do this as long as it takes to fill out the 2 hour meeting. There is no point to these meetings anyway.

Moderator: What accomplishment are you most proud of?

Fatimah: Not leaving my home for three months straight, during which I had time to marinate in the darkness and discover my true form.

Seb: I don’t know… nothing? …Actually, one time I ate 12 Nacho Cheese Doritos® Locos Tacos Supreme® in one sitting.

Moderator: What do you admire about your opponent?

Fatimah: I admire Procrastinate’s dedication to serving the degenerate population at UTD by providing them late night space to enjoy consuming garbage.

Seb: I don’t even know who you are.

Moderator: What makes you different from your opponent?

Seb: Unlike Darker UTD, our party has a concrete goal to achieve. Also, I’m willing to bet that neither of them have eaten 12 Nacho Cheese Doritos® Locos Tacos Supreme®  in one sitting.

Fatimah: Procrastinate may think the darkness is their ally, and thus want to keep the Taco Bell open late into the night. But we were born in the darkness, molded by the inherent despair of UT Dallas. We’ve suffered through hours of Honorlock, professors that we can’t understand, syllabi that change every other week. We are the party that truly understands the shadow that embodies this campus, and thus the shadow belongs to us, and we will show the darkness to you all.

Moderator: And now, for some questions directed at the specific parties. Seb, why did you name your party Procrastinate?

Seb: I didn’t have time to come up with anything better.

Moderator: Fatimah, does being a sophomore make you a less compelling candidate?

Fatimah: I entered this University virtually during the peak of the pandemic. I was quite literally in the dark, attending classes in my windowless gloomy room, staring at blank rectangles instead of faces during Microsoft Teams calls. My upperclassman cannot understand the darkness that flows through me. I was thrust into Honorlock when I was still doe-eyed, I watched in horror as anti-maskers partied in Northside on the UTD Reddit, and worst of all, I witnessed the soul-crushing end of dedensification.

My despair is unmatched, and because I have suffered, I strive to make this entire University suffer. Why move forwards, when you can move backward? Why find meaning in all we’ve endured when we can mindlessly wallow in discord and despair? I may be on a higher platform now, but I have not forgotten my roots. And I will not let you forget yours. I will be the one to bring back an Era of Gloom to UTD, more wicked and horrid than you’ve ever seen, for no one is more rotten than I.

Moderator: To Seb: How are you going to determine student priorities?

Seb: I don’t really care what the student body thinks. I just know that me and three other people are really annoyed when Taco Bell closes at midnight.

Moderator: And now, the candidates will engage in a time-honored fistfight.

*Fisticuffs ensued, and the vice presidential candidates Margaret and Clover are tagged into the debate.*

Moderator: And now bros, we’re headed to the cross examination.

Margaret: So you want us to fall in the depression rankings? Do you want us to lose our spot in the top ten least happy schools? Our spot’s been taken by the US Naval Academy! Would you have us lose to the University of Tennessee, Knoxville? KNOXVILLE???

Margaret: There’s ice cream at Dairy Queen, and ice cream inherently makes people happier! You don’t even know how difficult it is to work with food services on campus! You could never execute the Tobor Replacement Plan!

Margaret: Our running plan to replace the Taco Bell is to order all the Tobors through at once and crash into the place.

Margaret: And in any case, how would you even increase the Taco Bell Hours in the first place?

Clover: …I dunno, a petition?

Margaret: Go to the petition page on the SG website. That’s my handiwork for increasing misery.

Moderator: And now for the closing statements from both parties.

Seb: We saw a need amongst the student body for the Taco Bell to be open later, and honestly I thought I’d be running unopposed. So… yeah.

Margaret: UTD used to be a fugly campus with minimalist, brutalist architecture. But now? Trees and reflecting pools? Grass to touch? We used to be the university that was indirectly responsible for JFK’s assassination! Now look at us! One of the most LGBTQ+ friendly schools in the south? Opening up just a little bit to hear student concerns? We want all the students to be concerned, all the time! DarkerUTD is committed to bringing back the UTD of old. Broken. Barren. Devoid of all hope and passion. And with the entangling tools of bureaucracy, we can make UTD a darker place.