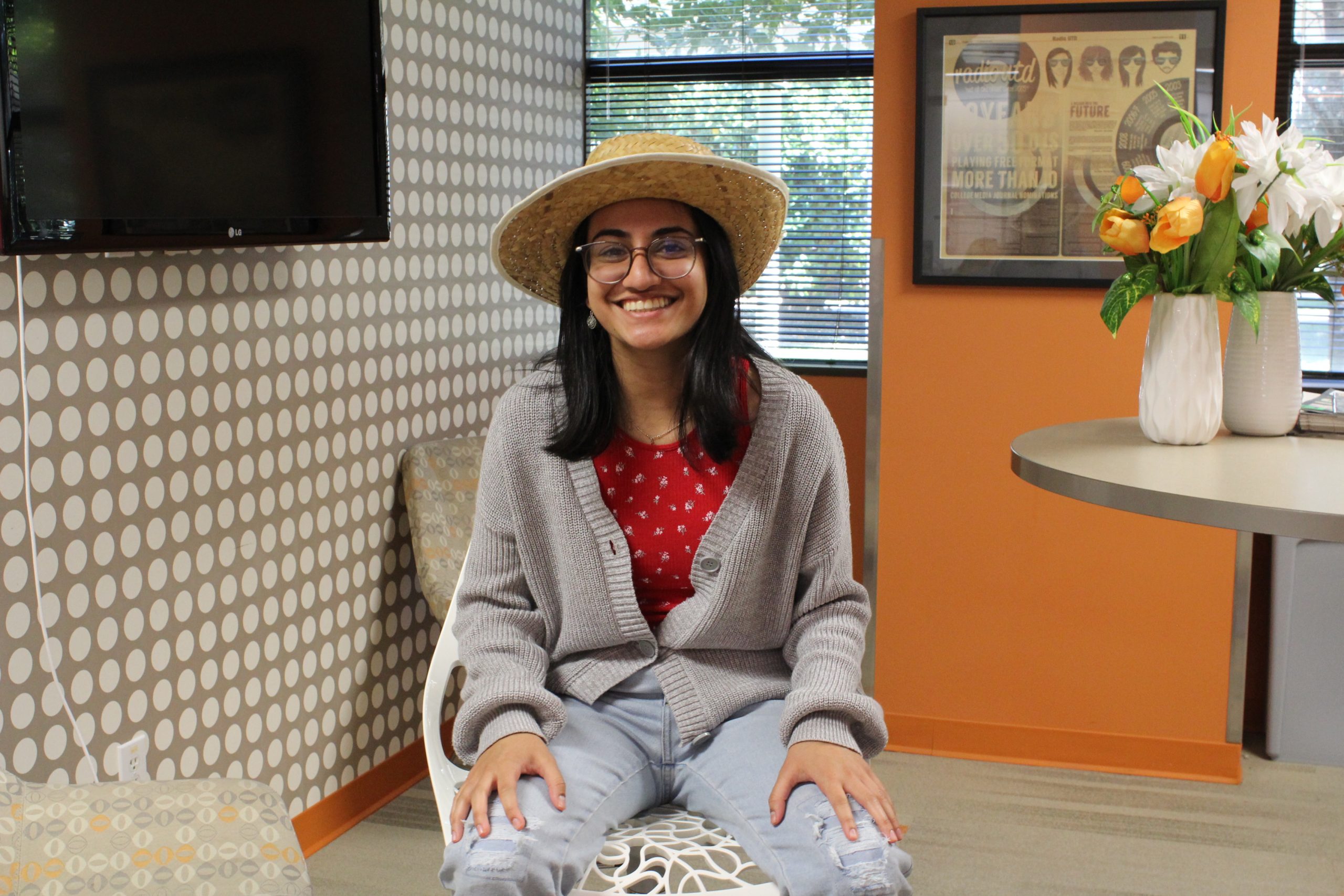 Sarina “Shiloh” Mohanlal is the host of “Good Morning Everybody,” a “weekly dose of aimless conversation” that airs from 10-11 a.m. on Wednesday mornings. Sarina’s sharp humor and high-energy personality make her a great conversationalist and a fantastic talk show host. But when Sarina sat down to chat with me, she brought a friend with her.

Sarina’s co-host on “Good Morning Everybody,” Maizie Croom, already had her moment in the AMP spotlight this past May. Sarina asked if Maizie could sit in on the interview anyway.

“She can be my translator,” Sarina joked.

Listening to the two chat, it’s easy to see why they have a talk show together. Sarina and Maizie have a charming rapport, clearly rooted in their close friendship. They balance each other well; Sarina’s enthusiasm brings Maizie out of her shell and Maizie’s thoughtfulness tempers some of Sarina’s zeal.

“I think it’s a bit of everything,” Sarina said about the show. “Some days we do like ‘would you rather’ type questions. Other days we’ll share little stories about our lives or our childhood. I think no matter what we do, we’ll try and connect it to our life.”

But the topic Sarina and Maizie land on the most often is, unsurprisingly, music. Both hosts originally held music shows on RadioUTD (Maizie still does, from 9 p.m. to midnight on Sundays). As a trainee, Sarina hosted a show called “Alphabet Soup,” which featured a wide variety of songs from different genres and countries. Sarina is fluent in three languages (English, Spanish, and Gujarati) and loves listening to music from around the world.

Shockingly, there was a time when Sarina didn’t like music at all.

“I was very anti-music for the first many years of my life,” Sarina said. “I remember people in middle school and high school having their earbuds in, and I was like ‘Why do they have earbuds in? Why are they listening to music? That’s so lame of them.’”

Then, during her freshman year of high school, Sarina watched a Snapchat story from a magazine showcasing three popular Latin songs (one of which was “Despacito” by Luis Fonsi).

“That’s when my music taste began, after watching that Snapchat story. I was like, wait, this music is kind of cool.”

Sarina eventually learned to speak Spanish and even won scholarships for her study of the language. She attributes her fluency to her love for Latin music.

“I always say now, if you can understand a person singing in another language, you’ll be able to understand them speaking,” Sarina said. “So once I started listening to lots of Spanish music, by looking at the lyrics alongside the song, I was able to understand how Spanish is spoken and sung.”

Sarina stuck to Spanish-language music for around a year before branching out to other genres and languages. Albanian, Danish, Norwegian, Italian, Portuguese — you name it, she’s listened to it.

“I actually don’t listen to Indian music though,” Sarina admitted. “I hear it enough at home.”

In general, Sarina tends to prefer listening to music in languages she can’t understand.

“If I listen to music in another language, my brain is constantly trying to understand what the music says…so then I go and translate the lyrics, and then I’ll start to recognize phrases,” Sarina explained. “Then the next time I hear a song and I hear that same phase, I’m like, ‘I know what that means! I understand like, one percent of the song!’”

“I love the decoding,” she said.

Sarina believes that music didn’t just improve her language capabilities but her personality.

“Before I learned Spanish, I was a really crappy person. I didn’t really have respect for other people’s cultures,” she said. By listening to music from around the world, Sarina was able to better herself as a person.

Surprisingly, Sarina is not a Spanish major (or a Latin American Studies major, since UTD doesn’t offer Spanish as a major). Neither teaching nor translating appealed to her, so she chose to major in Geosciences.

“I freaking hate rocks, though,” Sarina said when I asked her if she liked rocks.

Sarina, a senior, is hoping to go into hydrology after graduation. She’s currently divided on whether she should pursue her teenage dream of developing wells in underdeveloped nations or make money.

“Maybe I can share my fire music taste with the people of the Democratic Republic of the Congo or something,” she joked.

“But I talk a lot,” she said. “Like, in elementary school, I used to get in trouble every single day for talking too much. And that carried on throughout high school.”

Starting a talk show seemed like the natural course of action. It wasn’t all smooth sailing though. When Sarina had originally pitched the show, she was supposed to have a different cohost, who unfortunately had to cancel at the last minute.

“I think it’s been amazing!” Sarina said. “It’s really nice to do a show with someone you care about.”

In fact, Sarina said that one of the show’s biggest challenges has been reining it in their conversations.

“The ability to overshare is easy when your co-host is one of your closest friends, but we learned to put that filter on,” Sarina said. “To keeping things professional… but entertaining.”

“Good Morning Everybody” airs on www.radioutd.com/tuner/ on Wednesday mornings, from 10 – 11 a.m.